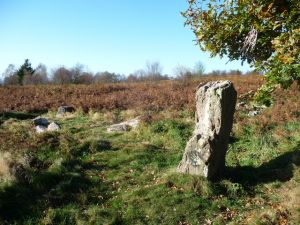 Grey Hill Stone Circle
Thirteen low stones remain of a circle just over 30 feet diameter. One unusual feature at Grey Hill is that the stones are butted against each other like a continuous wall. A solitary, tall (6 feet high) stone stands outside the circle, with a larger outlier nearby.
Within the circle are a large of large fallen stones, perhaps the remnants of a destroyed chamber tomb. If so, that would suggest that the stones making up the circle formed a kerb, and the outlying stone may have been part of an entrance.

In 1944 a local writer named Fred Hando suggested that two of the standing stones were arranged to form an alignment on the midwinter sunrise, but this claim is not widely accepted.

The stone circle has been dated to the Bronze age, roughly 2000 BC. The area is full of numerous prehistoric remains; within a short distance of the stone circle are other standing stones, several burial cairns, a possible stone row, hut circles, and a D-shaped field enclosure dating to the late Neolithic period.

The stone circle is on the southern slopes of Grey Hill, east of the Wentwood Reservoir. Footpaths skirt the base of the hill to the south, and follow the ridge of the hill just north of the circle. Its best to park at the Wentwood car park and walk back south onto Grey Hill Common. A good OS map is useful!