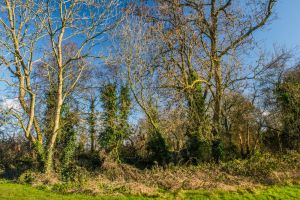 Bulwark Camp is a late Iron Age enclosure defended by a double bank and ditch. The enclosure was defended on one side by the River Wye and a steep-sided ravine to the south. Excavations within the enclosure have revealed traces of three rectangular buildings, but it seems likely there must have been a sizeable settlement.

There was a later settlement at Bulwark Camp during the Roman period, and the enclosure was used again during World War II as a prisoner of war camp. It is now a scheduled monument, cared for by Cadw. There is a similar Iron Age camp at nearby Piercefield.

Finding Bulwark Camp is half the fun. If you are feeling energetic you can take the Wales Coast Path long-distance trail from the centre of Chepstow. The trail passes beside Chepstow Castle and follows the course of the River Wye near Chepstow Priory, passing directly through the medieval Port Wall. It is just under one mile 'as the crow flies' from Chepstow Castle to the fort.

If coming by road, it gets a bit trickier. I've seen signposts on the M48 (Severn Road Bridge) approaching from the east, but I did not see any signs coming from Chepstow itself.

From Chepstow, you have to turn off the A48 onto Bulwark Road, left at a roundabout onto Bulwark Avenue and left again onto Alpha Road, but without any apparent signs to help. There is a very small parking area at the end of Alpha Road and a small information panel at the entrance to the fort.

It takes a great deal of imagination to get the most out of Bulwark Camp, for at first glance it just looks like an empty field fringed by trees on two sides and by a steep escarpment on the river side. It is only when you look more closely that you realise that the trees on the north side grow on the remains of an earthen bank, and there is a ditch beyond the bank that formed part of the Camp defences.

To the south, the trees obscure a steep slope, which would have helped form a difficult approach for attackers. There is nothing in the way of a site map that might help visitors get a better sense of the Camp, and a metal fence obscures the river, probably to make sure visitors don't fall off the cliffs.

If you can imagine the site without the fence and with the banks much higher, you start to get a picture of how impressive this clifftop site would have been. The view over the river is outstanding, and the location would have made Bulwarks an ideal spot for trade.

Bulwark Camp is an open site, accessible at any time. 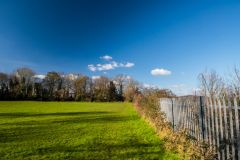 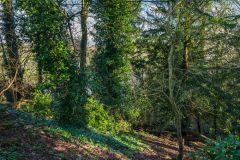 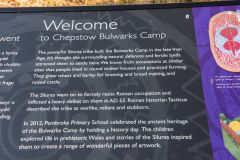