HERITAGE HIGHLIGHTS:   Superb Norman carvings inside and out 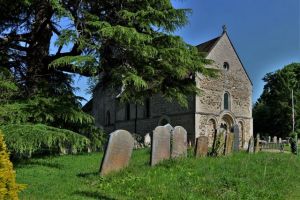 Stewkley, St Michael's Church
A superb Norman church dating to about 1150, St Michael's is one of the best-preserved and least altered examples of a mid-12th-century church in England. The building is of a mix of limestone rubble and ironstone, beneath a tile roof. The nave, chancel, and central tower all date to the 12th century.

In the late 14th century a stair turret, pinnacles, and parapet were added to the tower. In 1862 GE Street performed a major restoration, but this did little to affect the Norman core of the building.

The west exterior wall is a wonderful example of Romanesque style. Here you see the west door flanked by a pair of blind arcades. The arches of the arcades are beautifully carved and decorated in traditional Norman motifs.

The overall effect is extremely striking and quite lovely. Above the arcades runs a horizontal band of zigzag decoration that extends all the way around the church. There is a matching band running around the interior walls.

The west doorway is a particularly fine example of Norman work. The door columns are topped by a tympanum carved with dragons and foliage designs.

Inside the church, the first item of note is the Norman tub font, set on a moulded base. Built into the north wall of the chancel are a pair of small alabaster figures and a set of five 15th century wall tiles. The alabaster figures may originally have been part of the reredos, now vanished.

Throughout the interior are typical Romanesque carvings, particularly chevron, or zigzag decoration. The extravagant chancel, with quadripartite vaulting by GE Street, strikes an odd note set beside all the Norman sculpture.