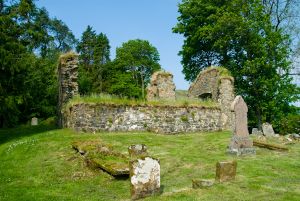 Ruins of Sadell Abbey
A peaceful village on the east coast of the Kintyre peninsula between Carradale and Campbelltown. Saddell is famous as the home of the 12th-century Cistercian monastery of Saddell Abbey.

The abbey was established by Somerled, the first Lord of the Isles, who drove the Norse out of the area in the 1150s. Around 1160 Somerled established a monastery here, with monks from Mellifont Abbey in Ireland. The abbey was finished under the reign of Reginald (Raghnall), Somerled's son.

The main point of interest at Saddell Abbey is a wonderful collection of medieval grave slabs and effigies. Most of these were the work of the so-called 'Kintyre School' of stone carvers, who almost certainly were based at Saddell. Others - the largest of the effigies - were the work of the famed 'Iona school'.

After the abbey was abandoned in the late 15th century, stone from the abbey buildings was used to construct Saddell Castle, a fortified manor house built for the powerful Bishop of Argyll. The castle can be viewed from the shore, where Saddell Water empties into the bay, but it cannot be visited. Unless, of course, you fancy a holiday with a difference, as the castle is in the ownership of the Landmark Trust, who rent it out as a holiday cottage.

A short walk from the castle brings you to an old holy well, which was probably associated with the abbey. An incised stone and drinking cup stand at the entrance to the well. The stone is a modern replacement, said to have been modelled after an original, probably medieval stone.

Nearby accommodation is calculated 'as the crow flies' from Saddell. 'Nearest' may involve a long drive up and down glens or, if you are near the coast, may include a ferry ride! Please check the property map to make sure the location is right for you.

More self catering near Saddell >>

More bed and breakfasts near Saddell >>