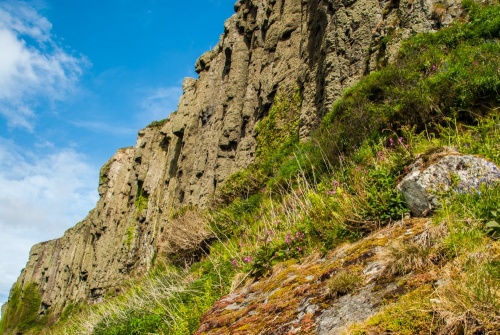 The Doon (sometimes known as Drumadoon Hill Fort) is an Iron age fortification on a headland just north of Blackwaterfoot, in the southwestern corner of Arran.

The fort uses the high cliffs on the west (the seaward side) for protection against an attack by water, and a single wall on the other three sides to create the largest hillfort on Arran, covering almost 12 acres (roughly 4.9 hectares).

The wall measures up to 3m thick (10 feet) and encircles the entire summit of the headland. The fort is 170m (558 feet) at its widest and 414m (1360 feet) in length. The wall today is hard to see clearly, being covered in turf, with stones showing through. 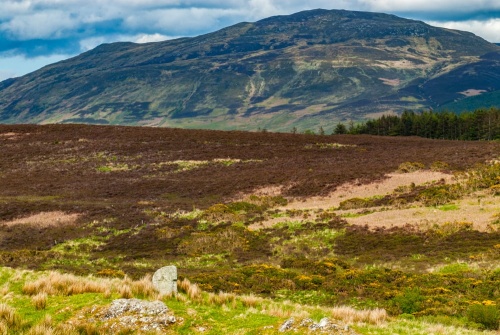 The wall has been largely robbed of stones in several places, but you can still clearly make out an entrance gap in the east wall. At the eastern end of the fort is a level terrace at the foot of a slope. At the base of this slope are several low hollows, suggesting the location of houses.

An antiquarian writing in 1806 recorded stone-built houses within the fort but there is no sign of any dwelling today. Archaeologists have suggested that The Doon may have acted as a tribal gathering place or 'oppida'.

Pieces of grooved ware pottery were found beneath the eastern wall. 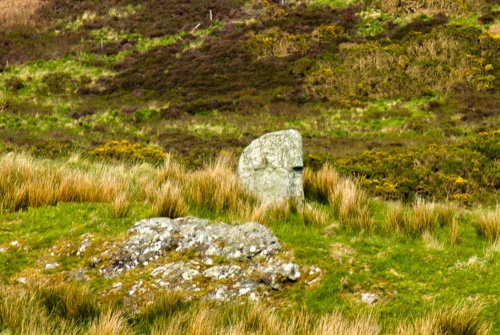 It is not terribly impressive, especially compared to the standing stones at Machrie Moor, a few miles to the north. The official RCAHMS description suggests that the Drumadoon stone may have been erected as part of a huge ceremonial complex that included the stones at Machrie Moor. The stone is 1.8m wide, 1.5m high, and 0.3m thick (5.9'W x 4.9'H x 1'D).

The Doon is unusual on the west coast of Scotland where single-walled promontory forts are rare. 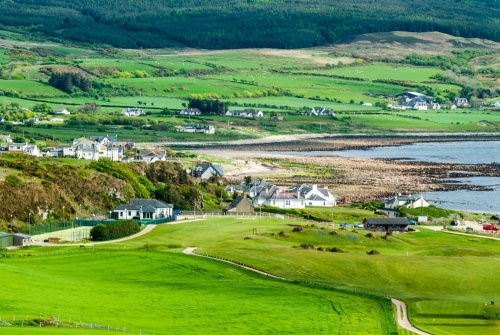 Blackwaterfoot from The Doon

The Doon is immediately north of the Blackwaterfoot golf course, and the Arran Coastal Way long-distance footpath runs by the western cliffs of the fort. There is public parking at the golf course, and from there simply follow the footpath north along the coast. The hillfort is on your right up a steep slope.

Be aware that there are no visitor facilities, and, when we visited, no information panels to explain the site.

Nearest Accommodation to The Doon Hillfort:

Nearby accommodation is calculated 'as the crow flies' from The Doon Iron Age Hillfort. 'Nearest' may involve a long drive up and down glens or, if you are near the coast, may include a ferry ride! Please check the property map to make sure the location is right for you.

More self catering near The Doon Hillfort

More Hotels near The Doon Hillfort

More bed and breakfasts near The Doon Hillfort