King's Cave and the legend of Robert Bruce and the spider

HERITAGE HIGHLIGHTS:   Was this the place that Robert Bruce was inspired by a spider? 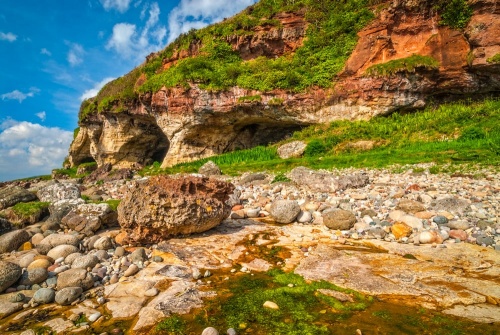 In 1306, Robert Bruce suffered two major defeats in his attempt to claim the Scottish throne and oust the English from Scotland. Harried by his enemies and on the run, Bruce sought refuge in a cave. There he watched a spider try and fail to connect its silken thread to the cave wall to make a web.

Again and again, the spider tried and failed to attach its thread, but it didn't give up, and after numerous attempts, finally succeeded.

Inspired by the spider's refusal to give up, Bruce vowed to try again to take the throne. After years of struggle, his efforts led at last to success, as he heavily defeated the English and their allies at Bannockburn and claimed Scotland.

But where did the famous encounter with the spider take place?

According to one tradition, it was in a sandstone cave north of Blackwaterfoot, in the southwestern corner of Arran. 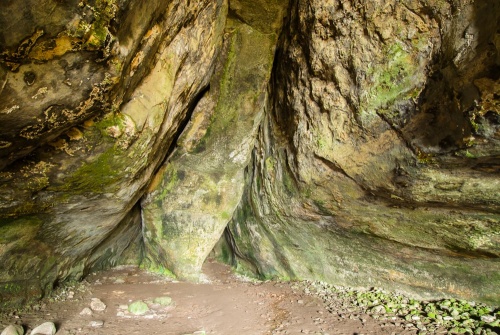 There are several caves set into the tall sandstone cliffs near Drumadoon. The cave associated with Robert Bruce and the spider is protected by a metal gate. The cave is an irregular shape measuring roughly 120 x 30 feet. At the far end, the cave splits into two parts divided by a slender buttress of rock.

Near the back of the southern aisle are figures of horses carved into the stone. On the southern wall in the main section of the cave is the figure of a deer and several examples of traditional cup and ring marks. On the north wall is an Ogham inscription.

Perhaps more interesting are the carvings near the front of the cave, where you will find two crosses and the figure of a man with his hands clasped above his head. On the north wall, near the entrance, are several figures of serpents. Opposite that are two triangular shapes. On the north side of the cave entrance, a stone seat has been carved from the solid rock. 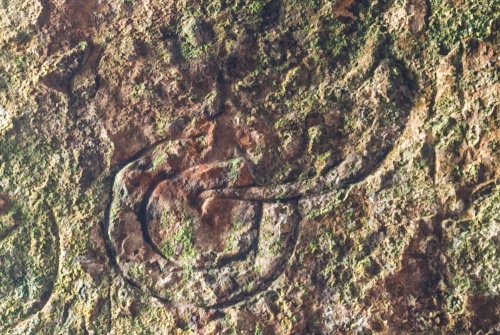 Another intriguing feature is a series of small holes both inside and outside the cave, possibly acting as sockets for timber bars.

King's Cave was excavated in 1909. The results were underwhelming; only small amounts of bone were found, with a brass fragment, several shells, and ash. 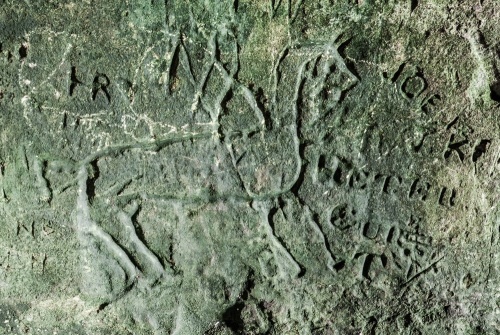 Did Robert Bruce (aka Robert the Bruce) have his famous encounter with the spider at the King's Cave on Arran? There are (at least) five candidates for the cave where the story took place, and the King's Cave claim is not the strongest of the five. The contending caves are:

It would seem much more likely that the encounter with the spider took place at one of the caves on Raithlin Island, where Bruce and his men overwintered in 1306 after fleeing Scotland.

The tradition linking Aran with the spider legend arose partly because of an article by the author Sir Walter Scott, who postulated that Bruce and his men travelled through Arran via Lochranza on their way to Kintyre, where they hoped to get aid from Angus Og at Dunaverty Castle, before stealing galleys to carry them across the Irish Sea to safety.

It seems that the tradition linking the cave to Bruce first appeared relatively recently. Before the Victorian period, it was referred to as Fingal's Cave.

The tale of Robert Bruce and the spider was first published in its present form by Scott in his Tales of a Grandfather (1828), though Scott may have adapted an earlier version with its central character being Sir James Douglas, not Robert Bruce.

So, is the King's Cave the place where Robert Bruce encountered the spider? We'll never know for certain, but the ancient drawings make this an intriguing site in any case, and the location is stunning. 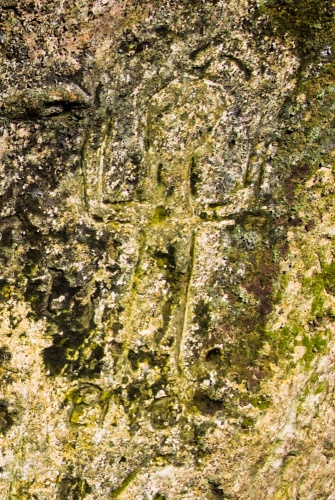 Carving of a man with raised arms

Getting to the King's Cave is relatively easy, but does involve a walk of about 4.7km (3 miles). There is a parking area with picnic facilities on the west coast road north of Blackwaterfoot on the edge of the Torr Righ Beag forest plantation.

From the car park follow the Arran Coastal Way long-distance path as it skirts the northern edge of the forest and reaches the coast. The trail turns south to follow the clifftops for 1km, then drops down through a gap in the cliffs to the rocky shoreline.

Just keep following the trail as it leads straight past the obvious cave entrance, marked by a metal gate.

Alternatively, follow a more southerly route that takes you through the woodland before emerging at the coast just south of the cave. Most people take one route there and the other route back, which makes for a very pleasant circular walk. 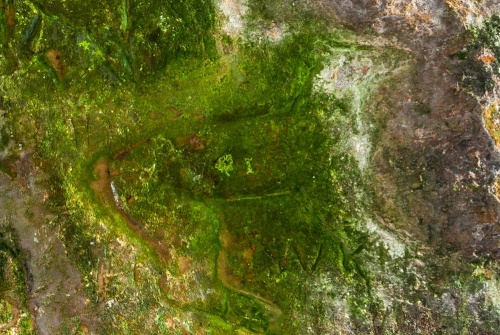 Carving of a deer (covered in moss)

If you're feeling more energetic, simply take the coastal path north from Blackwaterfoot, a distance of just over 2 miles. The coastal scenery is magnificent!

I suggest visiting King's Cave in the afternoon, when the sun is in the west, illuminating the cave mouth.

I also highly suggest that you bring a torch along to read the wall carvings, though I did manage with the aide of my camera flash. 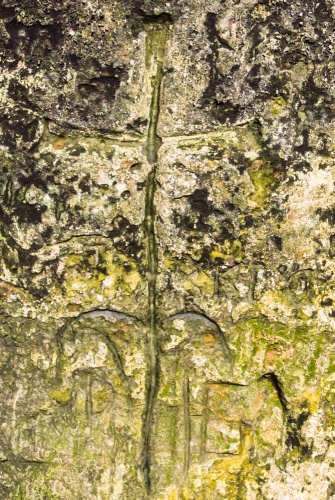 Carving of a cross

When we approached King's Cave, we heard the sound of a flute and beautiful singing. No, we weren't having an out-of-body experience; we had arrived just as a musician and singer were enjoying the incredible acoustics of the cave. Rather than intrude, we sat outside the cave entrance and listened. It was a surreal experience, with the singer's voice echoing out across the rocky shore towards the water beyond.

When they had left, we explored and photographed the cave, and were tempted to try the acoustics for ourselves, but I daresay the sound of my voice singing would have been enough to scare away anyone approaching the cave!

Nearby accommodation is calculated 'as the crow flies' from King's Cave. 'Nearest' may involve a long drive up and down glens or, if you are near the coast, may include a ferry ride! Please check the property map to make sure the location is right for you.