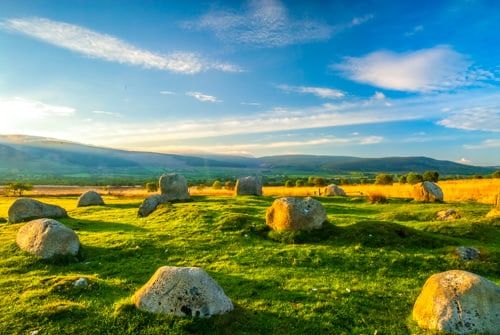 Moss Farm Road Stone Circle
Beside the trail that leads to the famous standing stones on Machrie Moor is an attractive little Bronze Age ring cairn surrounded by a circle of standing stones. Though it is called a stone circle, it is, in fact, a burial mound, surrounded by upright kerb stones.

The Moss Farm site (sometimes known as Machrie Moor 10) is the first prehistoric site you come to on the path to the more famous standing stones further east. It is probably not directly associated with the Machrie Moor stones but is a totally separate monument, erected at a different time.

The information plaque erected by Historic Scotland puts into words my own question about the site, 'Is it a stone circle with a later burial cairn built inside it or is it simply a cairn with a permanent stone kerb?'. The stones are rather short and stubby, not the tall, striking stones you will find in Machrie Moor grouping itself. 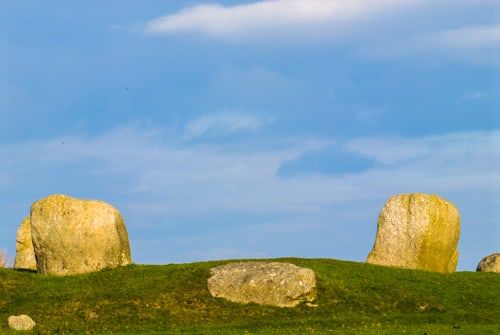 The ring cairn has been badly disturbed by stone robbing and the road that cuts across part of the site.

The site was originally a burial cairn of small stones surrounded by a 22m (72 feet) diameter kerb of standing stones and supported by an outer bank of stones. Only 7 upright stones remain, all roughly 1.3m (4.3 feet) tall. Another five stones have fallen on their sides.

These roughly-shaped stones are strikingly different to the tall, slender stones of Machrie Moor, visible just a short distance away on the other side of the farm track. 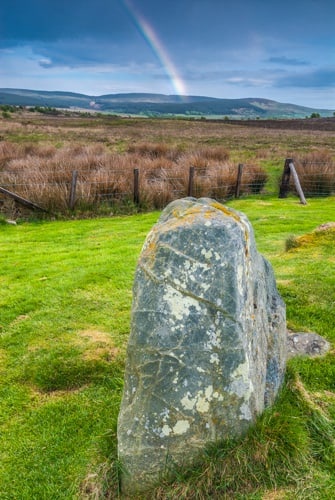 A rainbow over the standing stones

Park at the signposted parking area on the coastal road 3 miles north of Blackwaterfoot. From the parking area, walk east along the farm track, signposted to the Machrie Moor stones, and you will see the Moss Farm Road site to your right after roughly 1km (0.6 miles).

Nearby accommodation is calculated 'as the crow flies' from Moss Farm Road Stone Circle. 'Nearest' may involve a long drive up and down glens or, if you are near the coast, may include a ferry ride! Please check the property map to make sure the location is right for you.