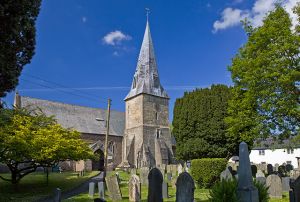 Braunton, St Brannock's Church
The people of Braunton can claim with some accuracy to have been worshipping on the site of St Brannock's church since AD 550, when a Welsh missionary named Brannoc, or Brannock, came to the area to convert the locals to Christianity.

Several intriguing, but not necessarily accurate, rumours revolve around Brannoc. One story claims that he was a household priest to Brychan, king of the Brecknock tribe, and that he married the king's daughter. The stories say that he landed in Devon at Saunton Sands, near the mouth of the River Taw. Brannoc built a church near the mouth of the Caen stream.

According to the tale, he had trouble finding a good site, but then he had a dream where angels told him to look for a sow and her brood, and build his church where he found them. This he did, and with great success, if history is any judge.

Whatever the origins of the first church at Braunton, a monastery later grew up around the site, and it is possible that the boundary of Braunton parish follows the outline of the original monastic lands. We know from historical records that there was a priest here before 857, at which time the estate was called Brannocminster, suggesting that the church acted as a mother church for the region. It seems that the relics of St Brannoc were kept at the church for many years, but vanished from the historical record at some unknown time.

St Brannock's church is one of the few in Devon to be mentioned by name in the Domesday Book, suggesting that it was a place of some importance.

Of the Saxon church at Braunton there are no remnants, though there is an intriguing fragment of 10th-century carving incorporated into the west wall of the tower. This appears to be part of a Saxon grave slab or cross shaft and carved with foliage designs and an inscription.

The church is composed of a nave, chancel, transepts, with a central tower. Much of the current building is 13th and 14th century. The interior is most notable for the set of Elizabethan oak pews, dating from between 1560-1593, which feature superbly carved bench ends. The bench ends depict a wide variety of subjects, including the Passion of Christ, heraldic shields, initials, and scenes from the life of St Brannock.

The roof is worth a good look, for its collection of painted and gilded bosses. One boss shows a sow and piglets, a reference to the story of how St Brannock found the site for his church.

The font is intriguing, with carved human heads at each corner. It is in a Norman-style but is almost certainly 13th or 14th century, so it may be that an old Norman font was reworked during the Decorated period. 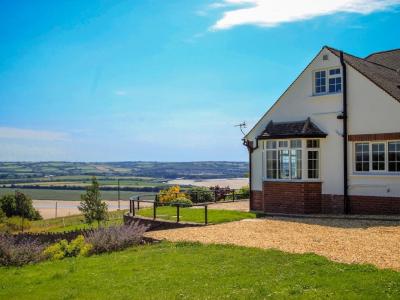 This detached chalet bungalow is situated near the Devon village of Braunton and can sleep 6 people in three bedrooms.
Sleeps 6 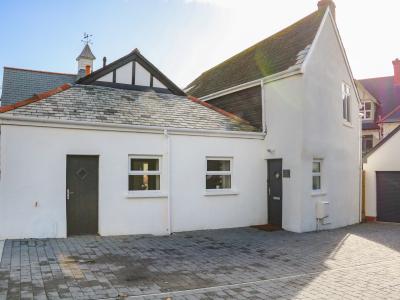 This detached cottage rests in Braunton, Devon and can sleep twelve people in six bedrooms.
Sleeps 12