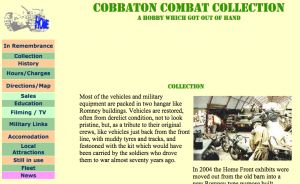 Cobbaton Combat Collection
Cobbaton Military Museum is billed as 'A Hobby which got out of hand'. It certainly did! Preston Isaac had a passion for World War II, and his collection of military paraphernalia, including tanks, guns, helmets, artillery, bombs, and other weapons.

The 'Home Front' is equally well represented, with the collection including ration books, blackout lamps, civilian gas masks, as well as Home Guard and ARP uniforms.

Vehicles and other exhibits are frequently used in TV, film, and video work to recreate authentic WWII ambience.