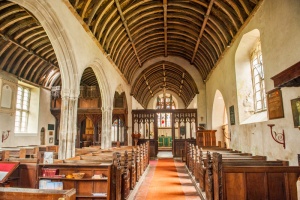 St Mary's church in the village of Atherington is one of the most enjoyable country churches to visit in Devon, and the only one with an intact medieval rood loft. The church was begun around 1202 by the De Willington family for the monks of Tewkesbury Abbey.

We do not know exactly when the church was dedicated but a record from 1272 shows the De Willington's presenting a rector. The family did more than just select a rector; from 1308-1318 all the church rectors were De Willingtons.

Most of the present building is in 15th century Perpendicular style, but the north aisle is Tudor, built by the Bassett family around 1579. The Bassetts were descended from Edward IV through his son, Arthur Plantagenet (see below).

The highlight of St Mary's church is the utterly superb north aisle screen, which remarkably retains its rood loft. In 1561 Elizabeth I ordered that all rood lofts be destroyed in churches throughout the realm.

Why did Atherington's rood loft survive? Perhaps the church was too remote, or perhaps the parishioners simply refused to obey the royal order, clinging instead to their traditional form of worship.

The rood loft is a superb piece of medieval craftsmanship. You can ascend a narrow, winding stair to the loft, where you can see the 16th century painted panels, facing inwards. The panels originally faced outward, towards the congregation, but in the early 20th century they were reversed in an effort to aid conservation of the precious painting. One panel depicts a royal coat of arms, another shows the arms of Bassett, Willington, and Beaumont.

While the rood loft is a wonderful example of woodwork, the same can be said for the screen facade facing the aisle. The west face is a symphony of carved details, including vegetation, strange beasts, cherubs, human figures, fruit, and Green Men. The effect is simply stunning. Unusually, we know who was responsible for carving the screen.

Records show that the work was begun by John Parrys, and finished by John Hill and Roger Down of Chittlehampton. The total cost was £14 7s 5d. That amount must have been more than the original estimate for the work, for the villagers refused to pay more than £10. The woodcarvers had to take a lawsuit to the Court of Chancery in an effort to receive the full amount.

Remarkably, the screen we see today is only a small section of the original, which stretched across the entire width of the church. Sometime around 1800 the chancel section was removed, leaving only the north aisle screen intact. A much plainer screen, probably brought from the Bassett family chapel at nearby Umberleigh, was installed to replace the chancel section. 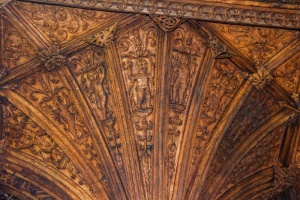 Carved cornice of the screen

Apart from the aisle screen one of the most appealing historic features is a large number of beautifully carved late 15th-century roof bosses in the nave, chancel, and north aisle. The bosses are carved with a wide variety of figures, including humans, animals, and a pagan Green Man symbol.

One grotesque figure represents Titivillus, a demon who is said to have recorded idle chatter in church, to be used as evidence on the Day of Judgement. He is shown with writing implements, which explains why he was considered the patron demon of scribes.

The octagonal font is 15th century, each face carved with a quatrefoil, with 4 faces also bearing a blank heraldic shield. There are also a series of seven finely carved 15th-century bench ends.

St Mary's boasts a wonderful series of historic memorials, some brought here from Umberleigh chapel when the chapel was torn down in the early 19th century. The chapel, dedicated to the Holy Trinity, was established in the 13th century by Lady Joan Champernowne, daughter of Sir William Champernowne of Umberleigh. Lady Joan married a knight from Gloucestershire named Sir Ralph Willington. Curiously she retained her maiden name, yet the couple's sons were all called Willington. 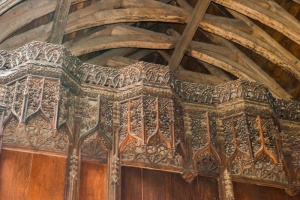 In the north chancel aisle is the worn effigy of a 13th-century knight in full armour, thought to be Sir William Champernowne, father of Lady Joan. The effigy wa carved around AD 1225. Much more grandiose is the 14th-century tomb chest and effigies of a knight and lady, thought to represent Sir Ralph Willington (d. 1349) and his wife, Lady Eleanor.

Nearby is an altar tomb with memorial brasses set into the top. The brasses depict a knight in armour flanked by his 2 wives. The knight is Sir John Basset (1462-1528), Knight of the Bath and Sheriff of both Cornwall and Devon. His wives are Anne Denys and Honor Grenville (1493-1566). Honor outlived Sir John and after his death in 1528 she married Arthur Plantagenet, an illegitimate son of Edward IV.

Next to the Sir John Bassett tomb is a simple grave slab to Sir Arthur Bassett and Elianora his wife, daughter of Sir John Chichester of Rawleigh. Sir Arthur tragically died of gaol fever at the Exeter Assizes of 1585. Sir Arthur's son, Robert, claimed the throne of England when Elizabeth I died in 1603.

His claim was based on the Bassett descent from Arthur Plantagenet, and claimed that Edward IV was in fact married to Arthur's mother, Elizabeth Lucy. As history records, his claims went unheeded and the throne passed to James I and VI of Scotland.

The combination of the medieval Tudor tombs, roof bosses, carved bench ends, and most of all, the exquisite screen and rood loft make Atherington's church an absolute delight to visit. When I came to Atherington I found the door locked and no indication of where I might find the key.

Acting on a whim I asked at the village shop across the street. Lucky for me, the shop keeper proved to also be the keyholder, and I was able to get into the church. So if the building is locked, and you don't see any signs indicating a keyholder, try at the shop first! 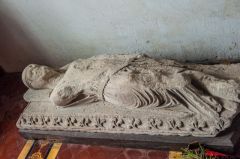 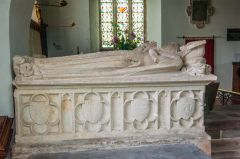 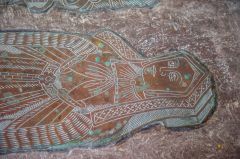 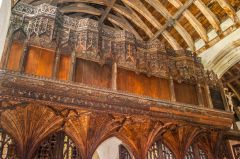 About Atherington, St Mary's
Address: Atherington, Devon, England, EX37 9HU
Attraction Type: Historic Church
Location: At the junction of the B3217 and B3227 in the centre of Atherington. Ask for the church key at the village shop opposite.
Location map
OS: SS591231
Photo Credit: David Ross and Britain Express