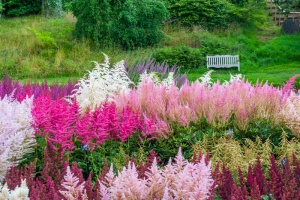 Compared to many of the top Devon gardens Marwood is a relative newcomer. The gardens were begun in 1950, at which time they consisted of little more than a simple walled garden. Since then an extensive program of planting and landscaping has resulted in a garden that is one of the great undiscovered pleasures of the county. Two lakes have been created, one with an island at its centre.

There are now over 3000 different varieties of plants spread over 20 acres. There is a greenhouse collection of Antipodean plants, and the national collection of camellias, with over 100 plants creating a cascade of colours in March and April. As well, Marwood boasts one of the largest collection of Astilbe plants in the world.

Wow! That's my one-word summary after visiting Marwood Hill on a cloudy day in late July when the astilbe were at their majestic best. I've rarely, if ever, seen such amazing colour in such profusion. The astilbe is massed in rank upon rank of complementary colours beside the largest of several lakes that run along the valley bottom. Around the edge of the lake are several strategically placed garden benches to sit and soak in the eye-catching colours.

Though the most colourful features at Marwood are laid out along the valley floor, this is very much a hillside garden, for the valley rises up on both sides of the sloping hillsides that define the valley. From the far side, you get excellent views over the valley to the tower of Marwood's medieval church, which stands like a garden folly on the horizon.

Aside from the astilbe collection, the most enjoyable part of the garden for me was the Bog Garden, punctuated with a poignant statue of an elderly man leaning on his cane, looking over the garden before him. The colour in summer is exceptional; lush masses of green foliage and colourful blossoms make this a visual delight.

If you get the notion I enjoyed visiting Marwood you're beginning to catch on; I loved it. This is one garden that deserves a high profile. Visit it for yourself and see if you don't agree. 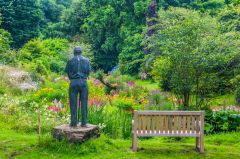 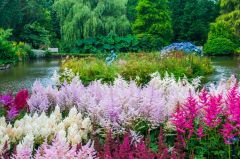 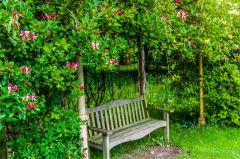 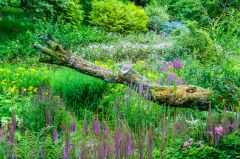 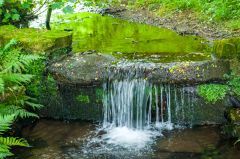 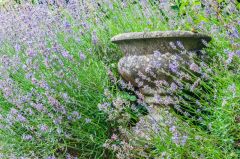 More self catering near Marwood Hill