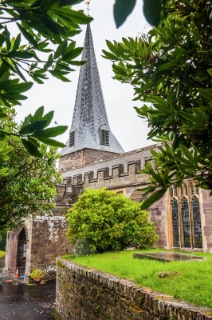 A chapel was established at Swimbridge in the late Saxon period and is recorded in the Domesday Book of 1086. However, it was not until 1866 that it became a parish church. The first vicar was Reverend John Russell, better known as 'Jack'.

Russell was famed as the 'Sporting Parson', and his passion for sporting pursuits led to his favourite breed of terrier being named 'Jack Russells'. But Russell was not a stereotypical absentee vicar; he served Swimbridge for 48 years and by the time he left in 1880 he was preaching four services each Sunday. Russell died in 1883 and was buried in the churchyard, with over 1000 people attending the service. Just outside the churchyard is the Jack Russell pub.

As soon as you enter the church you will find yourself facing one of St James's great treasures; the ornate wooden font cover encasing the lead font basin. The font cover is made up of 8 panels, decorated with carved heads in Renaissance style. Above the cover rises a finely carved canopy, possibly converted from a pulpit sounding board. 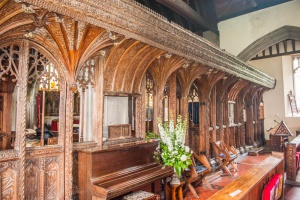 The font cover is a stunning example of workmanship, but the real highlight at Swimbridge is the exceptional rood screen, which spans the entire width of the church and stands 10 feet high. The quality of the ornately detailed carving is stunning. The eastern facade is decorated with exquisite fan vaulting, springing from vaulting stems carved with intricate foliage patterns. The result is arguably the finest medieval rood screen in Devon.

Almost overshadowed (literally) by the richly carved screen is the later 15th-century stone pulpit. Carved at the dawn of the Tudor period, around 1490, the pulpit has figures of saints carved within stone niches. If you look closely you can see traces of the coloured paint that originally covered the figures.

The pews are modern but several incorporate pieces of medieval carved bench ends.

The choir vestry and organ chamber make up St Bridget's Chapel, built by the Mules family of Irishborough. The chapel roof is decorated with carved bosses. One striking boss shows a figure of St Dunstan holding the Devil's nose with a pair of blacksmith tongs. The chancel roof is the oldest in the church but is unadorned.

One last feature is worth noting; on the exterior south wall is a sundial dated to 1755. 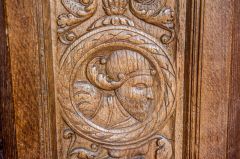 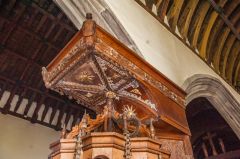 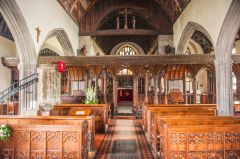 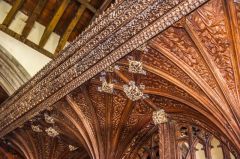 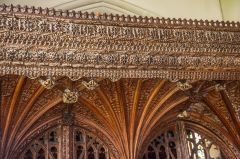 More self catering near Swimbridge

More bed and breakfasts near Swimbridge