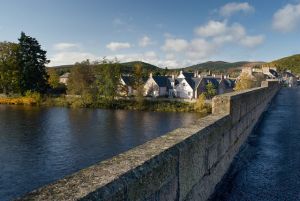 Ballater
Ballater stands at the heart of Royal Deeside, an attractive town on the River Dee which for over 100 years has seen the comings and goings of the royal family on their way to nearby Balmoral Castle. The town is set in fabulously beautiful countryside, ringed by low hills, in an area fringed by pine forest.

Given the beauty of the area and the present popularity of Ballater as a resort, it is hard to believe that the town is little more than two centuries old and that before 1760 little or nothing existed.

In that year a woman suffering from scrofula felt guided by a dream to bathe in a bog at nearby Pannanich. She was miraculously cured of her disease, a fact which prompted Colonel Francis Farquharson of Monaltrie to build an inn on the spot and popularize the area as a spa town. Ballater soon became immensely popular as a fashionable spa, in the same way as the English spa towns of Royal Tunbridge Wells and Bath.

The long-term prosperity of Ballater was assured in 1848 when Victoria and Albert leased, and later purchased, the estate at Balmoral. The royal couple came and went from their Highland retreat from Ballater station.

Ballater is also known for its Highland Games, which traditionally take place during the third week of August each year.

Aside from Balmoral Castle, nearby attractions include the historic tower house of Abergeldie Castle, Tomnaverie Stone Circle, and atmospheric Corgarff Castle.

More self catering near Ballater >>

More bed and breakfasts near Ballater >> 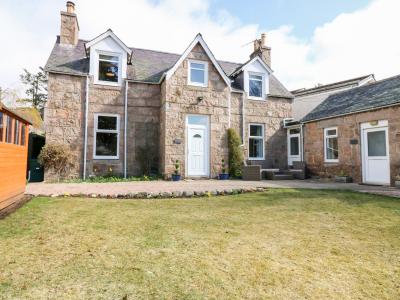 This semi-detached cottage rests in Ballater, Aberdeenshire and can sleep four people in two bedrooms.
Sleeps 4 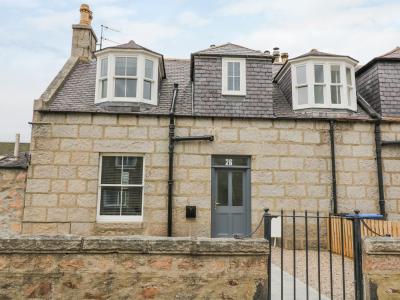 This cottage is situated in the village of Ballater near Braemar, and can sleep four people in two bedrooms.
Sleeps 4