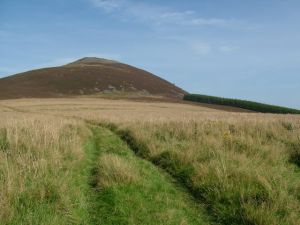 Tap O' Noth Hill Fort
The Tap O' Noth is a hill fort on the summit of the Hill of Noth, just above the village of Rhynie, in Aberdeenshire. The hill rises to 562 metres above sea level, making the Tap O' Noth fort the second-highest in all of Scotland.

Within the enclosure is a shallow depression which likely served as a cistern for collecting rainwater. There is evidence of platforms, which may have served as a foundation base for wooden houses.

It seems unlikely that the fort was occupied on a permanent basis; the height of the hill and the uncertain water supply suggests that it was only intended as a temporary refuge.

The best way to reach the fort is to walk from the Brae of Scurdargue, 1.5 miles away, on the A941. It's a steep walk up the hill, and will take about an hour from the car park.