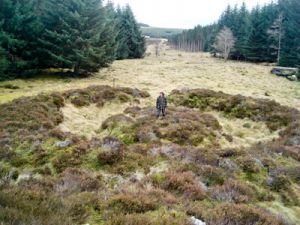 The name 'Wormy Hillock' deserves an explanation; according to local legend, the villagers managed to kill a dragon that had been terrorising the area. They decided to dig a grave to get rid of the corpse. As you can imagine, digging a dragon's grave is a lot of work!

The villagers got fed up, and simply rolled the dragon's carcase into the half-dug grave and covered it over with the earth they had already dug out of the hole. The earth on top of the dragon's corpse created the hillock. So now you know.

As for the henge, it is composed of an earthen bank and inner ditch enclosing an area about 16.5 metres in diameter, within which is a platform six metres across. In the south-east corner is a single entrance cutting through the bank.

A few miles away is the prehistoric hill fort of Tap O' Noth, and in the village of Rhynie are several symbol stones.

It takes a bit of determination to find the henge. Three miles south of Huntly, on the A97, turn west on the minor road to Mytice, where the road turns to a track at Clashindarroch Forest. From Mytice there is a two-mile walk straight ahead on the forest track to Finglenny.

Just past Finglenny, immediately before the track crosses Ealachie Burn, turn right onto a second track leading up the burn for 50 metres to the henge.