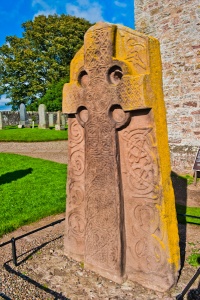 There are four ancient Pictish stones in the small village of Aberlemno. Three stones have been set beside the road through the village, and one solitary stone stands outside the east end of the church. Together, these four stones make up the most impressive single group of sculptured Pictish stones in Scotland.

The churchyard stone, technically a cross-slab, is the most impressive of the Aberlemno stones by far; this is an extraordinary relic, beautifully carved on both sides, and must be one of the finest and most historically important Pictish stones in Scotland.

Cross slabs are a mix of Christian and earlier pagan symbols, a reminder of a time when the new Christian religion slowly merged with older folk traditions and gave rise to an extraordinary period of artistic carving mixing and melding the two traditions of symbols.

The cross face, looking away from the church, is carved with a cross in high relief, infilled with interlace designs. Around the cross are fabulous, sinuous beasts, including serpents and horses.

The reverse of the slab (facing the church) is carved with a marvellously vivid depiction of a battle under a pair of traditional Pictish symbols. The battle is between men with long hair fighting an army of helmeted soldiers. The carving moves like a cartoon from the first engagement through to the death of one of the protagonists.

The scenes may well depict the Battle of Nechtansmere, fought about 6 miles south of Aberlemno near the modern village of Dunnichen in 685 AD. In that battle the long-haired Picts defeated the forces of King Ecgfrith of Northumberland. The Northumbrian king was killed, and Northumbrian control of southern Pictland effectively ended.

The carving is exquisitely clear and finely crafted; a real delight. There is a real vitality to the Pictish carving that makes the figures seem to come alive as if at any moment they might start to move under your gaze.

By the roadside - closest to the parking area outside the village hall - is another, taller double-sided cross-slab. Though more worn than the churchyard cross, this stone is still quite striking, with a ringed cross flanked by angels, and animals crouched at the base of the cross.

The reverse of the stone (away from the road) has a traditional crescent and v-rod above a double-disc and z-rod symbol. Below that is a vivid hunting scene, and at the bottom, scenes showing a centaur, and King David slaying a lion.

Historic Scotland's official description of this stone suggests that the decorative style was drawn from manuscript illustration. Like the churchyard cross-slab, this stone shows beautifully the merging of pre-Christian and Christian symbols as the two traditions met and melded. 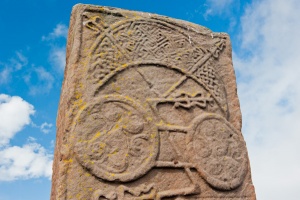 A few steps to the north, along the road in the direction of Brechin, is the smallest and most worn of the Aberlemno stones, a very faded and worn stone with no obvious carvings (at least none that appeared to my eye). The official description suggests that there is a curving symbol on the stone surface, but it is so eroded that the symbol was not immediately apparent. This stone was found in the field beyond the stone wall.

A few steps further north is the final stone, and this one is a gem.

A Class-I Pictish stone, this is remarkably different to the later cross-slabs. It is carved on one side with fantastic symbols of a serpent over a double-disc and z-rod, and below that, a mirror and comb. On one side of the stone are cup marks.

This has prompted some archaeologists to suggest that the stone was originally a Neolithic or Bronze Age standing stone re-used by the Picts. Whatever the case, the Pictish carvings are quite marvellous. This stone was also found in the field immediately beyond the stone wall.

The three roadside stones are set back from the south side of the B9134, protected by a stone wall from the farm fields beyond. Almost immediately opposite the large cross-slab is a signed parking area. You'll have to cross the road to see the stones, so please watch for traffic.

If you're a photographic nut like me, you'll want a wide-angle lens to capture the stones from the field side, as space is very limited by the stone wall! You can drive or walk to the kirk to see the solitary cross-slab, and there is a small parking area tucked away behind the churchyard. There is a brown sign to the kirk from the B9134.

The church itself is usually open daylight hours. It is worth taking a peek inside to view the ancient stone font, which may date to the 12th century.

Summing up the Aberlemno Sculptured Stones
The Aberlemno stones are justly famous. What I found fascinating is the mix of purely Pictish carvings (on the final roadside stone) and the mix of Pictish and Christian symbols on the cross-slabs.

I intended to simply view the stones once, then go on to other historic sites in the area. I was so taken by them, however, that I came back three times just so I could photograph the stones in good light and capture something of the wonderful carving.

There is a larger collection of stones in the small museum at Meigle, but there's something about seeing the stones outside, in their 'natural' environment, that really adds to their impact. I highly recommend a visit to Aberlemno if you have even a passing interest in Pictish carving or the early history of Scotland.

The stones are in the care of Historic Scotland, but as they stand in the open air they can be visited at any time. 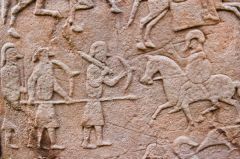 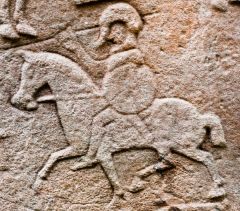 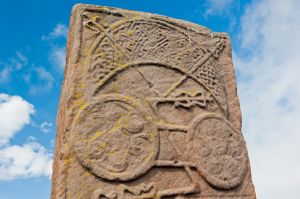