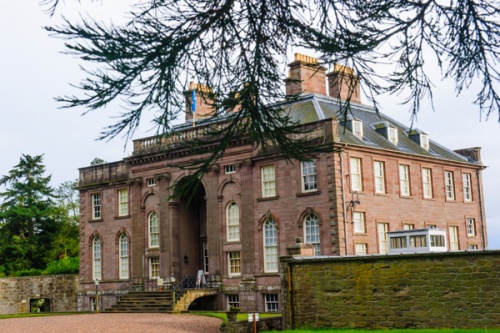 A wonderful example of a medium-sized mansion, the House of Dun stands on an elevated bit of land overlooking the Montrose Basin nature reserve. The house was built from 1730 for David Erskine, who called in neo-classical architect William Adam to design a replacement for an old tower house nearby.

Adam's design was completely symmetrical, as was the fashion in that time, though the house has been altered several times since it was built.

William Adam also designed the landscape surrounding the house, but little remains of Adam's landscape beyond several avenues of trees leading from the house. More impressive is the lovely walled parterre beside the house and the small terraced garden to the rear.

There is also a woodland garden called The Den, with sinuous walks leading to the old ruined kirk and family mausoleum, and to the last remaining archway of the original Dun Castle.

The interiors feature marvellous plasterwork by Joseph Enzer, particularly in the Banqueting and Dining Rooms. The allegorical plasterwork is replete with classical symbolism, and oblique references to possible Jacobite sympathies by the Erskines. You can visit the staterooms and 'below stairs' servants quarters and the delightful little kitchen. 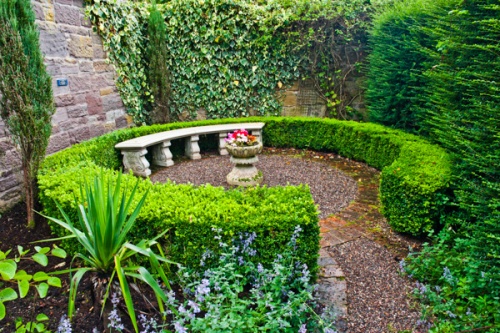 A quiet corner of the garden

The Erskines of Dun

The house may date from the 18th century, but there have been Erskines at Dun since 1375 when Sir Robert Erskine of that Ilk bought the estate. John, the 5th laird, was a friend of John Knox and helped establish the Reformed Church in Scotland.

In 1610 John, the 10th laird, and his younger brother, Alexander, were poisoned by their uncle Robert and his three sisters, who would inherit if the two men were removed from the line of succession. John died, but Alexander somehow survived. Robert and the two eldest sisters were executed, and the third sister - granted clemency due to her youth and her overt penitence - was exiled to Orkney.

Subsequent Erskines managed to fritter away the family fortune (some had a reputation for gambling), but the 13th laird, David Erskine, rose to prominence as a lawyer. It was he who decided to build the mansion at Dun to replace the earlier tower house.

In the grounds (just above the children's adventure playground) is a modern sculpture depicting a sword impaled in a tree stump. The sculpture is a reminder of an old local tale about a knight who went on the Crusades. He returned home to discover that another knight had married his wife, claiming that he was dead. The 'second husband' told the wife that it was the knight's dying wish that they marry.

The two knights fought, and just as it seemed the dishonest knight would win, the wife grabbed her true husband's sword and slew the second knight, the sword passing through his body and lodging in a tree behind him. You can get good views of the main house from the sculpture.

Walking trails lead from the Dun estate around Montrose Basin, now managed as a reserve by Scottish Wildlife Trust. The Basin is home to up to 30,000 geese during the winter months and is a haven for other birdlife throughout the year. 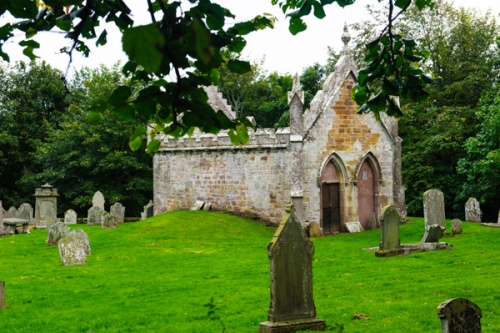 The location is delightful, with wonderful views out over the Montrose Basin. The house itself is small by comparison with large stately homes. It was a surprise then, that the guided tour of the house was so thorough; it took roughly one hour and three quarters to tour the house.

That's not a criticism, for the tour was fascinating, but if you prefer to wander about on your own, you may wish to time your visit for one of Dun's open days; once a month, usually the last Sunday, visitors can wander freely throughout the house at their own pace. There is a lot to see and enjoy, including fabulous plasterwork and embroideries, artwork and period furniture.

Perhaps the object that is most remarked on by visitors is the wonderful 'slipper bath', or 'boot bath', in Mrs Erskine's Dressing Room, though I couldn't imagine using it myself! The interiors are not overwhelming or opulent - with the possible exception of the Banqueting Room - but reflect a tasteful, refined style of the 18th and 19th centuries. 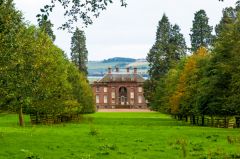 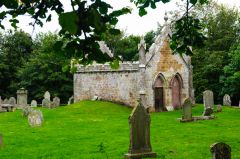 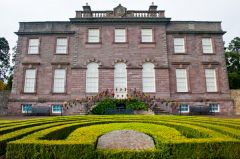 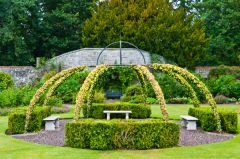 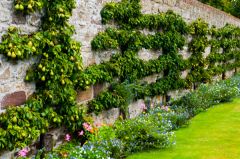 Nearest Accommodation to House of Dun:

More self catering near House of Dun

More Hotels near House of Dun

More bed and breakfasts near House of Dun

Self Catering near Montrose