HERITAGE HIGHLIGHTS:   Superb round tower and collection of Pictish stones 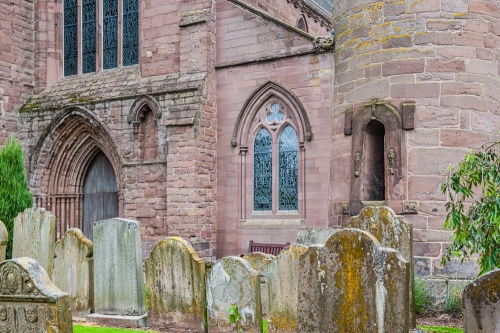 The first reference to a church at Brechin comes from the reign of Kenneth II (AD 971-995) when the king endowed a monastery here as a base for Culdee monks. Some of the carved stones now on display inside the cathedral are almost certainly linked to the 10th-century monastery.

In 1225 the Culdee/Celtic style monastic establishment was replaced by a Chapter of Canons who ran a small cathedral on the monastic model. The current cathedral building was begun shortly after that time, and most of the present building dates to the 13th and 14th centuries, with the inevitable 19th-century restoration. It is a lovely building, full of historic interest. Look for the frieze of grinning faces on the north exterior of the nave, at the roofline!

At the west end of the south aisle is a display of carved stones found in the area. This is a wonderfully eclectic mix of Pictish stones, medieval grave markers, and other delightful bits. One of the best stones on display is a highly ornamented hogback tomb. There are at least two other carved stones worth a mention. 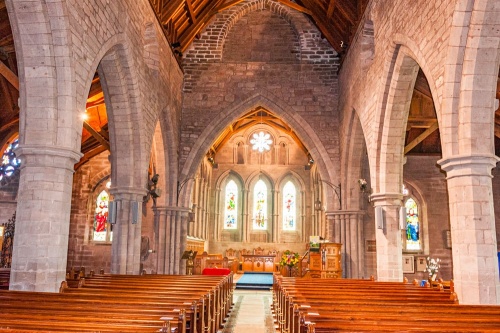 This wonderful cross-slab stood for many years in the old chapel at Aldbar. It is an upright cross carved from red sandstone, with relief carvings on both faces. The front shows a ring-headed cross on a square base, with a standing figure on either side, while the reverse shows wonderfully vivid beasts and human figures including a man on horseback and a depiction of King David wrestling a lion. The Aldbar Stone probably dates to the 9th or 10th century. 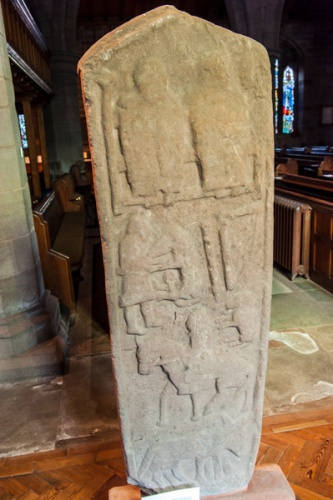 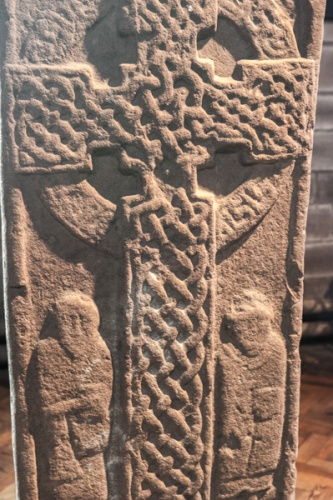 The reverse of the Aldbar Stone

Set against the east wall of the nave immediately north of the chancel arch is a magnificently carved Pictish cross-slab, variously called the Mary Stone or the St Mary Stone. This is one of the earliest Scottish sculptures with a Latin inscription.

The stone is made of red sandstone and measures just over 3 feet wide and 3 feet high. It has relief carvings on three faces with the most intricate carving in the centre of the cross. This depicts the Virgin Mary holding Christ (though apparently, one parishioner thought for many years that the figure of Christ was a sheep in Mary's lap. Looking at it, I can see why she thought so!). 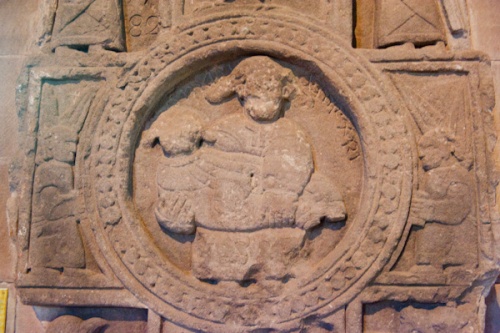 The carved stones would be reason enough to visit the cathedral but there is much more. The famous Round Tower at the west end of the church is one of only two such free-standing Irish-style towers in Britain. It is probably of 11th-century date and has a carved first-floor entrance that is quite wonderfully decorated.

The Round Tower is in the care of Historic Scotland, but you cannot enter the tower (unlike Abernethy, where you can climb right to the top). The cathedral itself is generally open to visitors during daylight hours. It is very well signposted from all the major roads around Brechin, and there is free parking a short stroll away o Church Street. A few blocks up the hill is another Historic Scotland property; the ruined medieval chapel of Maison Dieu. 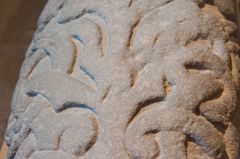 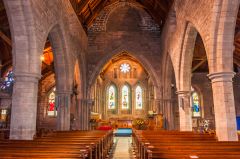 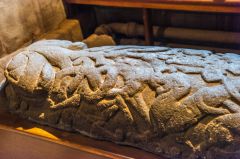 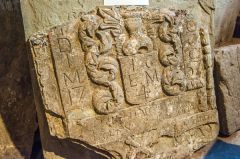 More self catering near Brechin Cathedral >>