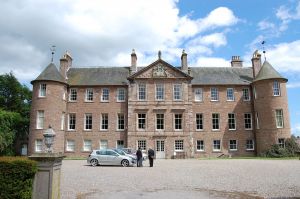 Brechin Castle
Brechin Castle is an early 18th-century country house, home of the Earls of Dalhousie for over 250 years. The castle is built to an irregular rectangular plan, with a turreted central block overlooking a central courtyard. It stands on a formerly moated site above the River Southesk. The interiors feature richly panelled rooms with an extensive collection of fine art and furniture.

Beside the house is the walled garden (open by arrangement) which features an array of unusual plants of particular interest to avid gardeners. The gardens cover 40 acres, including the famous walled garden, and feature woodland paths lined with colourful azalea and rhododendrons. As for the walled garden, it has been called 'one of the finest private gardens in Scotland'. It covers 13 acres and is at its best in Spring, when peonies, clematis, and cypress are lush.

The original castle dates back to at least the 13th century. In 1296 Edward I received the homage of John Baliol here. A few years later Edward was back at the head of an invading army. The defenders under Sir Thomas Maule held out for three weeks but were forced to surrender when Maule died.

In 1643 the 1st Earl of Panmure bought the castle from the Earl of Mar. The 4th Earl of Panmure rebuilt Brechin, giving it its current layout. A few years later the Earl joined the Old Pretender, James Stuart, in the abortive 1715 uprising. When the rising failed, the Earl fled overseas. The crown seized the estate, but the Earl's son, Henry, eventually managed to buy it back.

Of the early medieval building little evidence remains. The oldest part of the current castle is the kitchen block, where can be seen a stone bearing the date 1703, but in 1711 major renovations were made which gave the building its current form.

The Dalhousie Estate covers a staggering 55,000 acres, stretching from the vale of Strathmore to the Grampian mountains. Associated with the castle is the Brechin Castle Centre, a combination garden centre, country park, and family attraction.

More self catering near Brechin Castle >>