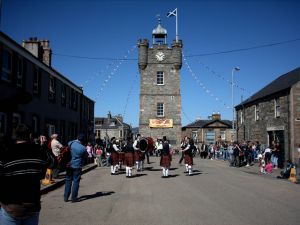 Dufftown
Dufftown is a planned town, built in 1817 by the 4th Earl of Fife, James Duff. For most of its existence, the town has been the most important centre of pure malt whiskey distilling in Scotland. This whiskey heritage is recalled in the old rhyme, 'Rome was built on seven hills, Dufftown stands on seven stills.'

The town is located in a wonderfully scenic setting ringed by hills on all sides. The streets are laid out in the form of a cross, with the town square at the crossing point. In the square is the most distinctive building in Dufftown; the old tolbooth tower.

Immediately north of the town centre is Balvenie Castle, a 13th-century fortress once owned by a succession of powerful noble families, including the Comyns, Douglasses, and Stewarts, and visited by Mary, Queen of Scots. The castle is surrounded by a high curtain wall, within which stands a three-storey 16th-century tower house built by the 4th Earl of Atholl.

In the old kirk at Mortlach, on the southern outskirts of Dufftown, stands the Mortlach Battle Stone, a late Pictish symbol stone. Mortlach itself is said to be the site where in 1010 King Malcolm II defeated a huge force of Danes.

About three miles to the south-east, on the banks of the River Fiddich, stand the ruins of Auchindoun Castle. If you fancy some exercise - and this is wonderful walking country - the Speyside Way long-distance trail starts just north of Dufftown and runs along the River Spey to Aviemore in the Cairngorms National Park.

More self catering near Dufftown >>

More bed and breakfasts near Dufftown >>