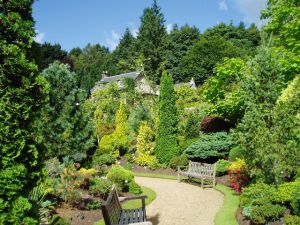 Colzium Estate and Garden
Just outside Kilsyth village lies the historic mansion house of Colzium, with grounds containing a walled garden and the ruins of a medieval castle. The estate boasts woodland walks with carefully planted conifers.

In the 12th century the powerful Earls of Lennox built a castle motte at Castlehill. The estate passed in time to the Livingston family of Callender, who erected an L-plan tower house here around 1575. In 1645 the Marquis of Montrose, James Graham, defeated a Covenanter army under General Baillie at the Battle of Kilsyth, a short distance away, on a site now covered by the Townhead Reservoir.

In 1703 the Castle was pulled down by the third Viscount Kilsyth. The Livingston family lost the estate for supporting the Jacobite cause, and it passed to the Edmonstone family of Duntreath, who built a fashionable new house in 1783, a short distance from the ruins of the earlier castle. Stones from the castle were used to help build the 18th-century house.

When the Edmonstons transferred their family seat back to Duntreath in the 1930s the elegant mansion house was left derelict. It was purchased by the Lennox family and donated to the burgh of Kilsyth. Much of the house was pulled down due to dry rot, but the Victorian facade remains. The house itself is used primarily as a wedding venue, but the gardens and grounds are regularly open to the public.

There are attractive woodland walks through the Colzium estate, winding through ancient woodlands, taking in a glen with tumbling waterfalls, and an arboretum featuring rare and unusual trees. Near the 18th-century house are the walled gardens, with heathers, conifers, and more rare plants. The garden is especially noted for its displays of snowdrops in early spring. 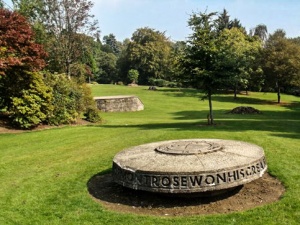 The Earl of Montrose memorial
Also in the grounds are a specially made curling pond and a 17th-century ice house. The ice house, built around 1680, is practically a small house in its own right; built into the bank of Colzium Glen, with a vaulted roof and a complex structure involving passageways, doors, and a game pit. The ice house was used to refrigerate game and eggs, using ice hewn from nearby ponds to keep the temperature low.

Ice seems to be a theme in the history of Colzium, for it the estate boasts the oldest curling ponds in the world. Taking advantage of the specially built ponds was the Kilsyth Curling Club, the first in the world, established in 1716.

At the top of the glen is Granny's Mutch, a semi-domed viewing platform in the shape of a traditional woman's bonnet. Another feature is The Lade; an 18th-century water channel built to bring water from Banton Loch to the Forth and Clyde canal. There is also a theatre house set in what was once the donkey house and laundry for the estate.

The garden is usually open daily, Easter through September. The grounds are open throughout the year.

On the second floor of Colzium House is a museum of local heritage, housed in the former chapel. The museum exhibits items from the original castle at Colzium and the later tower house. The museum has very limited opening hours, primarily during school holidays. The rest of the House is not usually open to the public.

The Colzium Estate is a pleasant place to spend an afternoon, with wonderful gardens containing a mix of conifers, shrubs, plus formal and formal features including the remains of not one, but two historic castles.

More self catering near Colzium Estate and Garden >>

More bed and breakfasts near Colzium Estate and Garden >> This semi-detached bungalow rests in Kilsyth, Scotland and can sleep six people in three bedrooms.
Sleeps 6