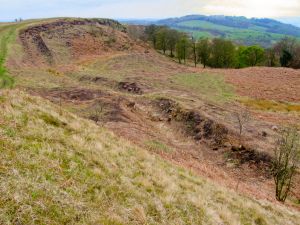 Croy Hill Roman Fortlet
Only an outer ditch and a pair of beacon platforms survive of this Antonine Wall fort atop Croy Hill. The nature of the rocky terrain meant that the Romans were not able to dig a ditch as they normally would, but had to cut through solid rock to create a defensive barrier outside the Wall.

Within the fort is a large well and a rectangular bath house lies just outside the northern corner. Excavations at Croy Hill revealed that the 2nd-century fort lies atop an earlier Roman camp, which has been linked - though with precious little evidence - to the 1st-century campaigns of Agricola in Scotland.

So here on one site, you have remains of a fort, a later fortlet, a temporary marching camp, and two raised platforms used as signal towers. It is not surprising that Croy Hill was used for signalling; at 120m above sea level it is one of the highest points on the Antonine Wall and it offers wide-reaching views from the Firth of Forth in the east, the Kilsyth Hills to the north, and Bar Hill, the next fort to the west.

Excavations revealed foundations of a granary, headquarters building, a stone-lined well, and a shrine with an altar to nymphs. Artefacts uncovered during the excavations included coins from the reigns of Domitian (AD 81-96) and Trajan (AD 98-117).  Later investigation found a fortlet some 80m west of the main fort, and fragments of pottery suggesting that the hill was settled before the coming of the Romans.

Nearby accommodation is calculated 'as the crow flies' from Croy Hill Roman Fortlet. 'Nearest' may involve a long drive up and down glens or, if you are near the coast, may include a ferry ride! Please check the property map to make sure the location is right for you. 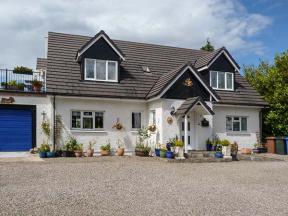 This charming, bright and spacious first floor apartment (with private entrance) is set in the pretty highland village of Croy and can sleep four people in two bedrooms.
Sleeps 4