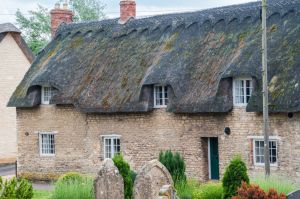 Thatched cottage in Cottesmore
Cottesmore is best known these days for the nearby RAF base of the same name, but this pretty village has been around since before the Domesday Book when it was known as Goda's Moor. The parish church of St Nicholas is a very large Decorated Gothic building with a 12th-century doorway and 14th-century spire.

There is an RAF chapel in the church as well, a testament to the close links between the village and the nearby airbase over the past several decades.

Just outside Cottesmore is the Rutland Railway Museum, which tells the story of the railway's role in industry, especially relating to quarrying ironstone in the Rutland area. There is an open-air steam centre at the museum, with a large collection of steam-driven locomotives.

More self catering near Cottesmore >>

More bed and breakfasts near Cottesmore >>