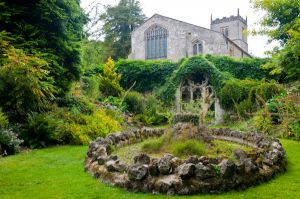 The church of All Saints at Londesburgh is a historian's treasure; a wonderful historic building with a plethora of intriguing artefacts and associations with the great and the good.

The first historical record of a church at Londesborough was in the early 12th century when the powerful Herbert the Chamberlain granted it to his son, William (later St William of York). The most likely building date is between 1110-1130 and it seems likely that Herbert himself built the church.

The south doorway dates from the original church built by Herbert, but it is not the oldest artefact inside the south porch. That honour goes to a small Anglo-Danish cross-head set into the wall above the south door, which probably dates to the 10th century.

The north aisle is 13th century, as is the chapel and lower part of the west tower. The upper section of the tower is 15th century, in Perpendicular style.

The interior has so much to see it is hard to know where to begin! The font is 13th century, though it certainly seems to have been altered at some point since. The pulpit dates to 1719 and is a cut down version of what was originally a triple-decker.

Even more modern but even more interesting is the rood screen, designed by Temple Moore and built by JE Elwell of Beverley around 1885. Moore also designed the east window, which was created to celebrate the 21st birthday of the eldest son of the 1st Earl Londesborough.

Much earlier is a small brass set in the chancel floor, commemorating Margaret, Lady Clifford (d. 1493). Lady Margaret was the wife of 'Butcher' Clifford and mother of the 'Shepherd Lord', who was brought up locally by a family of shepherds.

The Lady Chapel is awash with memorial brasses to members of the Boyle family, Earls of Burlington, whose family vault lies under the chancel. The entry to the vault is in the chapel, indicated by two heavy iron rings set into the floor.

The brasses were originally used as mere coffin plates but were later set on the wall to show who was buried in the crypt. It is interesting to see such relatively simple and unassuming nameplates for a succession of rich and influential lords!

Perhaps the best known of the Burlingtons was Richard, the 3rd Earl, sometimes called the 'Architect Earl'. The 3rd Earl was an immensely influential patron of the arts and architecture and helped popularize neo-classical style in 18th century England.

In glass frames against the south wall are four cloth banners carried at the funeral of the 1st Earl Burlington in 1698. At the west end of the south aisle is a pair of funeral helms used in that same funeral procession from London to Londesborough.

In the churchyard is the tomb of Thomas Knowlton, botanist and gardener to the 3rd Earl.

Immediately beside the churchyard is the site of Londesborough House, a stately home that was dismantled in the 19th century.

NB. As of this writing, the church is open from July to September on Wednesdays 10.00 am until 4.00 pm

More self catering near Londesborough, All Saints Church >>

More bed and breakfasts near Londesborough, All Saints Church >>