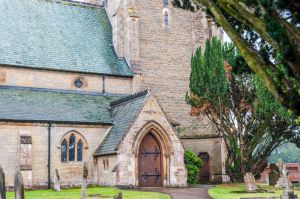 The wonderfully named village of Cherry Burton enters history through the descriptive talents of the Venerable Bede, who relates that St John of Beverley performed a miracle at a place most historians associate with this location. Around AD 686 a nobleman by the name of Earl Addi called on John to consecrate his new church at North Burton (though there are numerous 'Burtons' in the area, North Burton is thought by many to be the current Cherry Burton).

John agreed, and when he had finished, the nobleman asked him to lay his hands on a sick servant, who was near death. The servant miraculously recovered from his illness, and Addi was so grateful that he granted the manor and advowson to the monastery founded by John at Beverley.

Why is this important? Well, it is one of the first examples of the parochial system in England, where the church was built and endowed by the local lord of the manor. 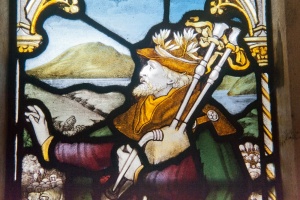 By the time of the Domesday Book, the manor was held by the Archbishop of York for the Minster of St John. The Saxon church was probably of wood and was eventually replaced by a more durable Norman building of stone.

By the mid 19th century the church was falling apart, so it was pulled down and an entirely new church was built. It is this Victorian building we see today.

The main item of historical interest inside the church is a small plaque at the west end with two small brass memorial tablets. These were discovered 6 feet underground when a new grave was being dug in 1905. Both tablets show fascinating coats of arms commemorating Robert Crompton (d. 1646), his wife Jane, and his second wife Anne, of York.

The other main interest here is the stained glass. The nave windows are by the Kempe studios, and all have his trademark wheatsheaf symbol - see if you can spot it! One of the windows commemorates Captain Cecil Burton of the Royal Fusiliers, who died at Mhow, India, of enteric fever contracted on active duty in 1897. 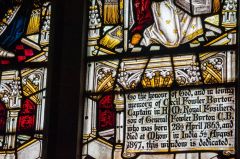