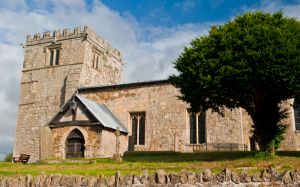 An aura of history clings to All Hallows church in the pretty hillside village of Goodmanham. It was here, in this quiet spot,  that one of the pivotal points in British history occurred in the year AD 627. In that year Edwin, King of Northumbria (a huge kingdom stretching from the Humber to the Firth of Forth and west to the Isle of Man) was converted to Christianity on this spot.

The story comes to us from the Venerable Bede, who wrote about 100 years after the events. According to Bede, Edwin forged an alliance with the powerful southern kingdom of Kent and cemented that alliance by marrying Ethelburga, princess of that place.

After two years of marriage, Edwin called a conference at Londesborough, only two miles from Goodmanham, and asked his advisors to debate whether he should convert his kingdom to Christianity. Ethelburga's priest, Paulinus, put the Christian case. Then Coifi, Edwin's high priest and guardian of the old ways, stood up.

Perhaps to Edwin's surprise, Coifi agreed to cast aside the old Celtic religion. He took up a battle axe, and borrowed a warhorse, both of which were banned for priests, and rode to his pagan sanctuary, where he flung his axe into the temple. Perhaps to the surprise of Edwin's advisors, no terrible ill befell Coifi.

They were convinced; this new Christian religion must be more powerful than their old ways. So they all pitched in and burned the temple. Shortly after, Edwin was baptised and Christianity became the official religion of northern Britain, a change that would reverberate down the pages of history for many long years to come. And it happened here.

After Edwin's momentous conference, Goodmanham disappears from the pages of history until the Domesday Book, when it seems there was no church. The current church was built in 1130, with a simple nave and chancel. Later additions were a north aisle and a squat west tower. One slender lancet window at the south-west corner remains from the first 12th-century building.

The font is a beautifully carved 16th-century piece, and the interior features several works by Temple Moore, whose contribution is commemorated in one of the lovely late Victorian stained glass windows. Other windows depict the story of Edwin's conference at Goodmanham, with figures of Ethelburga, Coifi, Paulinus, Edwin, and Bede.

The font is early 16th century, replacing a previous font which was then lost for many years until it turned up in a farmyard, used as a drinking trough. That early font is now on the floor near the Tudor font.

From the stylistic evidence, the earlier font may date to as early as the 9th century, indicating that a Saxon church stood on this site before the current building was erected. Nearby, at the west end of the church, are fragments of a medieval tomb set into the wall.

The chancel arch is a treasure; it measures only seven feet across, and is distinctly skewed, leaning over at a frightening angle on one side. At first glance, you might think that the weight of the building has caused it to fall out of plumb, but a closer look is reassuring; the walls on either side are straight up and down. The only conclusion one can draw is that the builders intended the arch to be severely skewed on one side!

More self catering near Goodmanham, All Hallows Church >>

More bed and breakfasts near Goodmanham, All Hallows Church >>