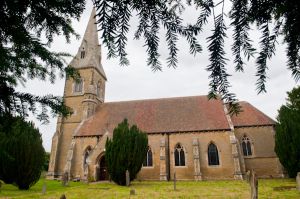 The redundant church of St James in the picturesque village of Warter stands on the site of a medieval church established by a priory of Augustinian canons established here in 1132. Earthwork remains of the monastic buildings can be seen to the east and north of the church.

The Augustinians left in 1536 when Henry VIII suppressed the monasteries, and the current church was built in 1862 for Josslyn Pennington, the 5th Lord Muncaster.

Pennington called in architects AR Pite and WG Habershon to create a lovely Victorian building in medieval Gothic style, with a striking tower and slender spire which can be seen from some distance away.

The church was part of the Pennington efforts to rebuild Warter, which, over the course of the late Victorian period, was transformed into a lovely estate village, with attractive cottages and 'modern' facilities (modern to the Victorian way of thinking).

The church was declared redundant in 1990 and was threatened with demolition. It was rescued from its fate by the Yorkshire Wolds Buildings Preservation Trust, and with the aid of a number of charitable bodies, was transformed into an educational, cultural, and heritage centre for the Wolds.

That sounds very grand, but in practice, it means that the interior of the church is filled with a variety of information panels which help visitors understand the geology, history, architecture, and heritage of the Wolds. The church is also used for conferences, concerts, meetings, and a changing program of special exhibitions.

Aside from the Wolds heritage features at Warter, the church itself is well worth visiting for its superb Victorian stained glass and the monument to Lady Isabel Wilson, who died in childbirth at the age of 23, in 1905. Lady Isabel's lovely monument is exquisitely crafted in white marble and was designed by George Frampton, best known for the famous statue of Peter Pan in Kensington Gardens, London.

The stained glass windows in the south wall of the nave were the work of Robert Anning Bell, and commemorate Gerald Wilson, who died in 1908 at the age of 23, and Lord and Lady Nunburnholme. The elaborate monument to the first Lord Nunburnholme, also by Frampton, stands at the south-east end of the nave.

There are leaflets in the church giving details of walks around Warter village.