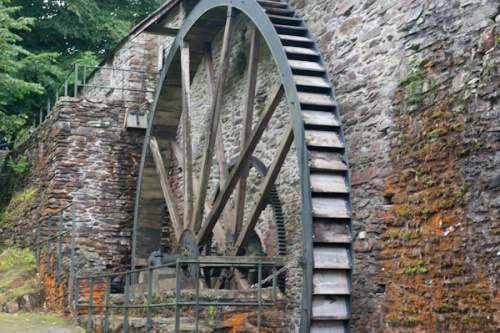 The Dyfi Furnace is a charcoal-burning blast furnace built around 1755. It is probably the best-preserved example of this type of industrial furnace in Britain. The industrial heritage of Furnace goes back long before the mill was established here.

In the 17th century, the area was known for silver, lead, and copper mining. The first industrial buildings on the site were the Ynyshir lead smelting works, established in the early 17th century.

The lead smelting works may have been the brainchild of Sir Hugh Myddleton, who was responsible for greatly expanding metal mining in Ceredigion, starting around 1620. Lead ore was transported from mines to the south on packhorses. The smelting process used local wood as fuel. The processed ore was then transported by ship from the Dyfi estuary.

Ceredigion silver became highly prized, and Charles I established a royal mint at Aberystwyth in the 1640s. The Aberystwyth mint was captured by the king's Parliamentary enemies and briefly reestablished at Ynyshir in a vain attempt to supply the royal treasury with silver coins to pay the king's army.

The iron-smelting works were established in 1755 by Vernon, Kendall, and Company. The Kendall family eventually became sole owners. The Furnace was fueled by charcoal made from locally gathered wood.

The blast was powered by a waterwheel, run from water diverted into a channel off the river. It seems likely that most of the iron ingots were shipped to the Kendall family's forges in the West Midlands for transformation into finished iron products.

The high heat needed to process the iron ore was generated by a pair of bellows driven by the waterwheel. Raw materials for the smelting process were stored in a large barnlike structure further up the hillside - this can easily be seen from the path at the top of the Furnace building. Material was tipped into the top of the furnace, and the molten iron flowed into moulds on the casting house floor at the bottom of the building.

The ironworks only stayed open for 50 years, and by 1810 the furnace had been abandoned. The smelting works were then converted into a sawmill, running off a large waterwheel, which has now been restored.

The Dyfi Furnace has been called a 'hidden industrial gem', and I'd have to agree with that assessment. It is a fascinating site, beautifully situated in a lovely wooded area. There is not a lot at the site other than the large water wheel, but numerous information panels are placed about the furnace to illustrate the industrial processes that took place there. 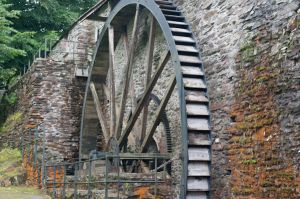 More self catering near Dyfi Furnace >>