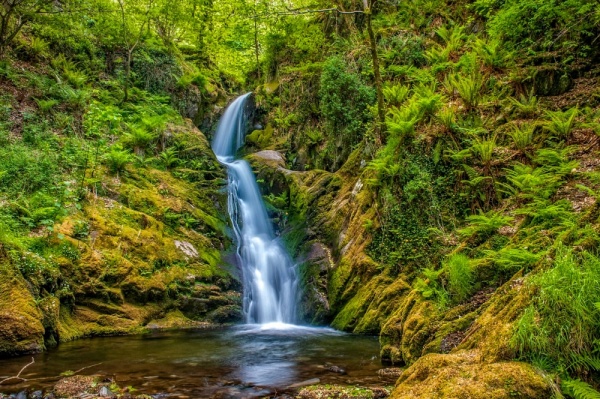 The Tal-y-Lyn Valley in the south-western part of Snowdonia National Park takes in a wooded gorge along the Nant Dol-g?ch stream, a tributary of the River Fathew. Though the area is just four miles inland from the beaches of Tywyn on the coast it feels much more remote and rugged. A series of three waterfalls tumble down the steep sides of the gorge into pools below, and a popular circular walk links all three waterfalls.

The walk is short - about 1-mile round trip - and well signposted. The going is fairly easy and should pose no problems for anyone of reasonable mobility. 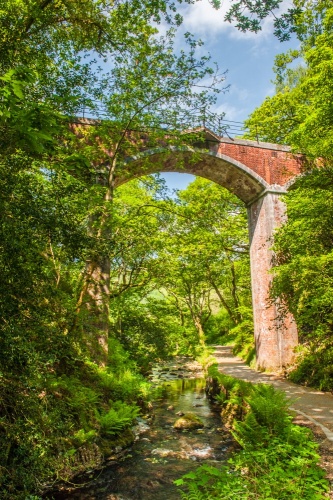 The walk begins at the Dolgoch Falls Hotel on the B4405, easily reached from Tywyn or Machynlleth. Parking is free but there is a donation box, with all money collected going towards maintenance of the trail and information panels along the route. There is a cafe next to the car park where you can get welcome refreshments after the walk - our daughter highly recommends the ice cream.

Rather than arriving by car you can take the popular Talyllyn steam railway and stop at Dolgoch station, about 200m from the Dolgoch Falls Hotel. Unlike other stops on the Talyllyn line, the Dolgoch railway station was built for tourist traffic, bringing hordes of visitors to enjoy the waterfalls. Not surprisingly then, the route from the station to the Falls is well signposted. 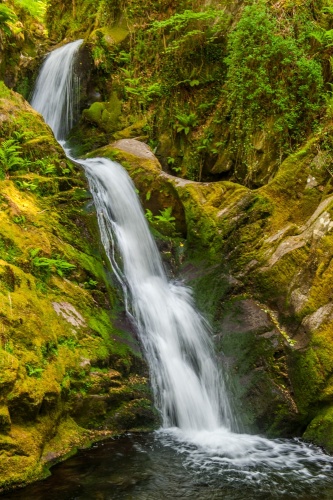 From the hotel car park take the signposted trail as it goes through a gate and follows the riverside. This first section of the route is well-maintained and suitable for wheelchair users. You pass under a railway viaduct serving the Talyllyn narrow-gauge steam railway - the worlds first preserved railway - and soon reach the lower falls.

There is a viewing platform for the Lower Falls (Rhaeadr Isaf), and to the left of the falls you can see a cave entrance, a relic of mining operations. There are several cave openings along the route but they are not safe to enter so please exercise caution.

The path begins to rise after the Lower Falls and then splits in two. The right-hand path sticks close to the riverside, so take this route. Moss and ferns carpet the forest floor along this section of the route, making everything a lush green colour.

Now you come to a set of stone steps leading up to the Middle and Upper Falls (Rhaeadr Uchaf). The steps can be slippery in wet weather so do take care. You get a reasonably good view of the Middle Falls from the path.

After leaving the Middle Falls viewing point the path rises steeply to the Upper Falls, where you will find a picnic area. 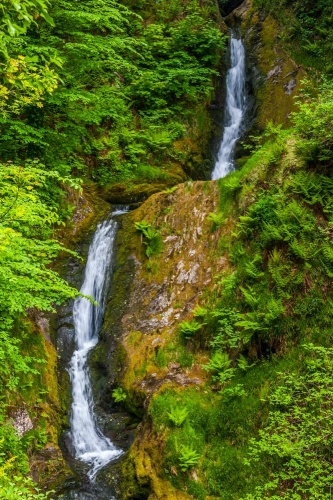 You can simply retrace your steps to return to the car park, or you can avoid the stone steps by taking an alternate path further away from the river. To take this option simply follow the trail through the woods until you come to a bridge across the river.

Cross the river and follow the trail along the far bank of the river until you come to the Lower Falls. There you can rejoin the paved section of the trail for the final leg back to the car park.

Though the trail can be slippery and muddy after rain, this is also when the waterfalls will be at their best. Despite the fact that the actual distance is quite short I recommend giving yourself at least 1.5 hours to enjoy the walk, You will want to linger and enjoy the waterfalls, or perhaps a picnic, and children will want to play in the rock pools at the base of the Upper Falls.

And here's a piece of music trivia to finish with; Dolgoch Falls were the setting for the 1994 music video 'No Quarter: Unledded' by Jimmy Page & Robert Plant of Led Zeppelin. 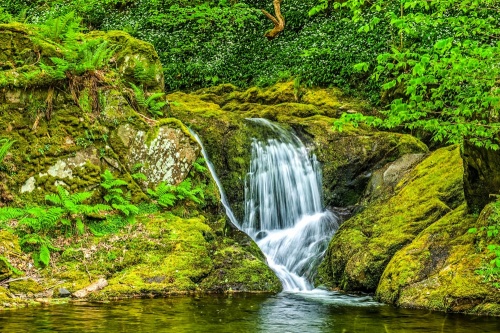 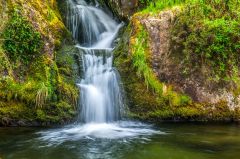 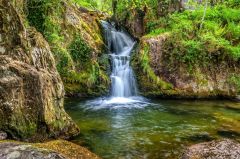 Self Catering near Tywyn