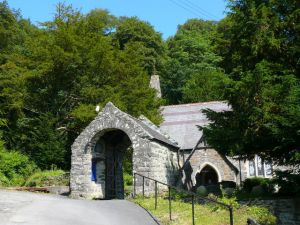 Llandre, St Michael's Church
St Michael's church is a 19th century restoration of a medieval building. Near the lych gate is an ancient holy well and a gnarled yew tree stands in the churchyard. Carbon dating has revealed that the yew is about 2000 years old.

The ancient yew is a reminder of just how long there has been a settlement here. It seems very likely that an early Celtic church was founded near the yew, possibly dedicated to St Ffraid.

The Norman lord Walter de Bec built a motte and bailey fortification on top of the nearby hill around 1110, but it was destroyed by the Welsh. The castle was abandoned, and it is thought that stones from the Norman fortifications were used to build a church below the castle mound, dedicated to St Michael.

The church served an extremely large area, as the tightly packed graveyard will attest. In fact, the graveyard proved so densely used that by 1373 the sexton had to be paid a yearly fee of 4 shillings to rebury exposed bones. The church could afford the expense, for the vicar received a portion of income from fishing at Borth. The funds helped pay for putting fresh rushes on the earthen floor.

The vicar did not fare so well in the Tudor period, for the villagers collected tithes for the crown, but only gave a small portion of them to the vicar. There must have still been a good income, for it is from this period that the church gained its greatest treasure, a silver chalice, dated 1573. Things improved more in the early 17th century, when parish meetings were held in the vestry, and often adjourned to the nearby Black Lion pub.

The church is located in a pretty hillside spot, on the route of a church heritage trail. St Michael's is open to visitors most days and offers wonderful views over the village below.