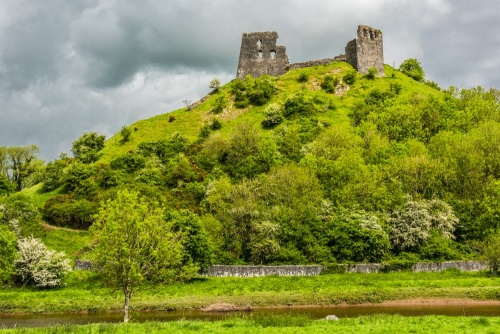 Dryslwyn Castle and the River Tyfi

Dryslwyn Castle was built sometime in the 1220s by an unknown Welsh lord of Deheubarth, on a steep, isolated hill overlooking the Tywi plain. The most likely builder is Rhys Grug, one of the sons of Lord Rhys. After Rhys Grug's death in 1233 Dryslwyn passed to his youngest son Maredudd ap Rhys, and then to Maredudd's son Rhys ap Maredudd.

Rhys ap Maredudd initially supported the English king Edward I, but in 1287 he rebelled against Edward in a dispute over land. Edward sent an English army of 11,000 men to besiege Dryslwyn Castle.

The siege lasted from 24 August to 5 September during which time the English battered the castle walls with a huge siege engine. They also put men to work digging tunnels under the castle walls to undermine the foundations.

The mining operation was initially a disaster and 150 men died when the tunnels they were building to undermine the castle collapsed on them.

Dryslwyn remained in English control after the siege, and a small town grew up on the hilltop site outside the castle walls (though the town probably began when the castle was still in Welsh hands). Today the remains of the town borough defences are one of the most interesting features of a visit to Dryslwyn. 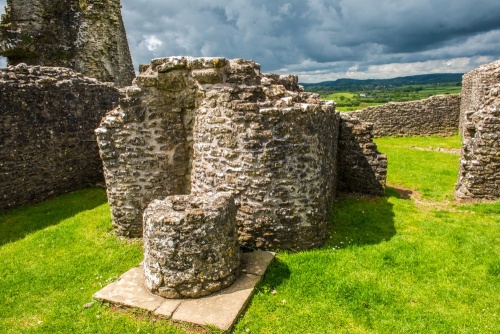 Remains of the Great Hall foundations

Remains of the settlement outside the castle walls are scanty. You can clearly see the western gateway with its earthwork banks. This was originally topped by a stone wall and defended by an outer ditch. You can easily make out the groove for the portcullis that protected the west gate.

Within the town walls you can only make out turf-covered bumps and lumps on the sloping ground to indicate where the town stood. The town buildings were made of timber and stood on terraces cut into the hillside. Though the timber structures have long since rotted away you can easily make out the terraces. We do not know the population at Dryslwyn but by the 14th century there were at least 34 houses plus granaries and other service buildings inside the walls.

The castle was extended and partially rebuilt in the 14th century, but early in the 15th century it was slighted and fell out of use.

The first fortification consisted of a round tower and a domestic range within a walled court. In the late 13th century a pair of walled courts were added between the tower and the walled borough. The best surviving remain is the outer face of the domestic range.

Only the scant remains of a hall and keep walls survive to give some notion of the original layout.

In the medieval period you could only reach the castle by passing through the town beneath it, over a timber drawbridge to an outer gatehouse passage. The passage was defended by doors at both ends and by a portcullis. You can still see remains of stairs leading up to the top floor and a wallwalk.

From the outer gate you cross to an inner gate, defended by a guardhouse. The gate passage was initially defended by a round tower, but after Edward I captured the castle he added a second gate and portcullis.

The inner gate gives access to the heart of the castle; the inner ward. Here you can see the oldest part of the castle, a round tower and walled enclosure built by Rhys Grug in the early 13th century. Inside the enclosure are a separate kitchen and great hall. Later English additions included n east hall and extensions to the middle and outer wards. Those additions made Dryslwyn one of the largest native welsh castles.

One of the most striking features is a projecting chapel tower, built just before the siege of 1287. The adjoining wall collapsed after being undermined by King Edward's men, killing many of the attackers in the process. 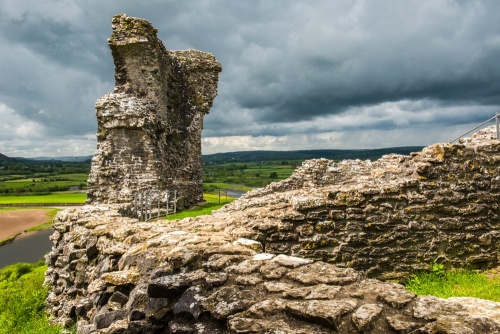 Approaching Dryslwyn is an experience; the castle hill rises above the surrounding plain, making the castle visible for a long distance. I had a hard time keeping my eyes on the road as I drove towards it. There is a parking area just opposite the base of the hill, by the River Towy (or Tywi).

Beside the parking area are picnic benches and a reconstruction of the huge siege engine used by the English in 1287. You cross the road to the base of the castle hill and follow the well-signposted path as it switches back and forth up the hillside.

It is fairly steep going, and you will probably want to stop more than once on the way up, if only admire the amazing view. The path leads first to the outer gates of the town borough, so you are actually following in the footsteps of medieval visitors.

You pass through the town gates and follow the trail around the slope of the hill to the outer gatehouse, then turn back across the hill to the inner gate and the core of the castle. The views from the castle itself are simply stunning and make the stiff climb well worthwhile. 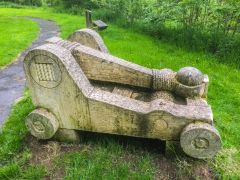 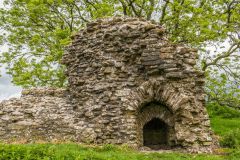 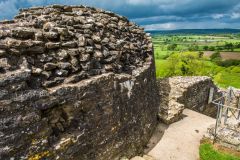 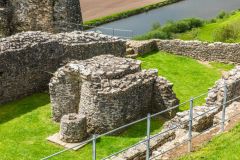 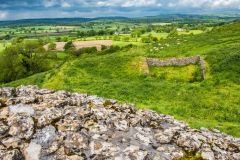 More self catering near Dryslwyn Castle >>