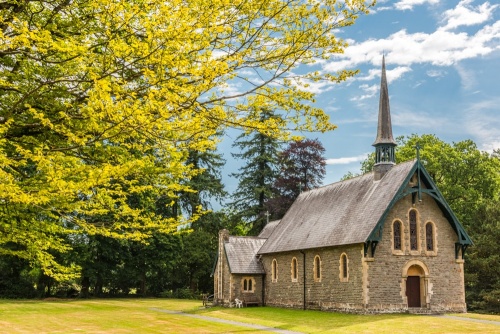 Holy Trinity church in Pontargothi was built in 1865 of local sandstone with a Gothic style bell tower. Highlights include excellent stained glass windows, a wooden barrel vault nave, and a series of 25 frescoes decorating the interior.

Llanegwad was served for many years by St Egwad's church, founded in the 11th century, and by several other chapels. In 1865 Henry Bath of Alltyferin commissioned architect Benjamin Bucknall to create a new church about 1/2 mile north east of Pontargothi. Bucknall was heavily influenced by Eugene Viollet Le Duc, who restored Notre Dame cathedral in Paris.

Bath's family made a fortune in Cornish tin, then switched to exporting Welsh coal and importing guano and copper. When the railway made commuting to Swansea from the Tywi valley possible, Bath built a mansion at nearby Alltyferin. Bath was a staunchly religious Anglican, but rather than impose his views on the locals worshipping at St Egwad's church, he had an entirely new church built at his own expense, on land owned by Talley Abbey.

He hired Bucknall to design a new church, and work began in 1865, though the church was not consecrated until 1878. By that time Bath was dead, dying unexpectedly on a sea voyage back from Chile in 1875. Bath had originally planned to have his family buried in a vault beneath the altar. The vault was built, but the church was never consecrated for burials, so the vault stands empty, and the churchyard looks remarkably uncluttered, like a carefully mown lawn, decorated with just a single churchyard cross. 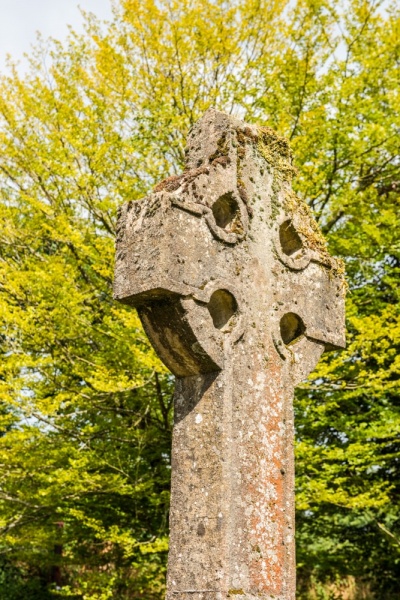 Bucknall created a simple church in Romanesque style, with Gothic touches, decorated with stained glass windows by the famous London firm of Clayton and Bell. The west window depicts Christ in Majesty, while the east window shows the Crucifixion, Resurrection, and Ascension.

A striking nave window shows prophets and the 4 Evangelists, while a window in the chancel illustrates some very Victorian-looking angels. The windows are so richly coloured that they seem to shine. That's no accident, for Clayton and Bell used medieval techniques to create a greater luminosity than other Victorian glass-makers.

The font is made from Swansea marble, but the most interesting feature of the interior is the amazing series of paintings by Arthur Stansell, of Taunton. There is an ornate frieze running around the interior, and the walls and ceiling are richly decorated with Gothic motifs. Murals run from floor to ceiling, seeming to cover every surface in a monochrome scheme of ochre on cream. Near the altar the monochrome gives way to gilded embellishments.

Unfortunately, a coke-fired heater gradually covered all the paintings with an opaque layer of grime, until almost none of the original paintings could be seen. It was only after a concerted conservation effort in 2007 that the paintings were restored to their original splendour. 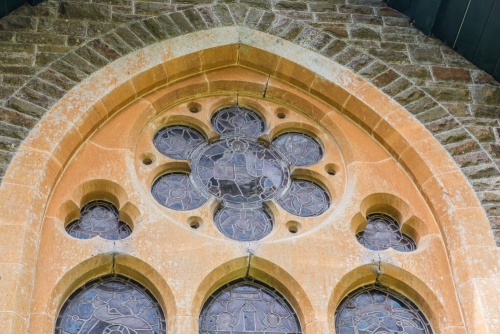 The church is located up a minor road 2 miles west of Llanegwad, off the A40. The road is immediately west of the bridge across the River Cothi at the hamlet of Pontargothi. The church is on the right about 1km from the A40 junction. There is parking through the gates for several cars.

Unfortunately, it appears that the church is normally kept locked. It was certainly locked on our last visit, but that doesn't take away from the wonderful countryside location. Even if the church is locked you can still enjoy the attractive exterior decoration. 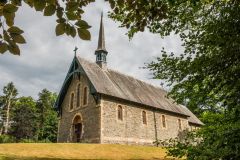