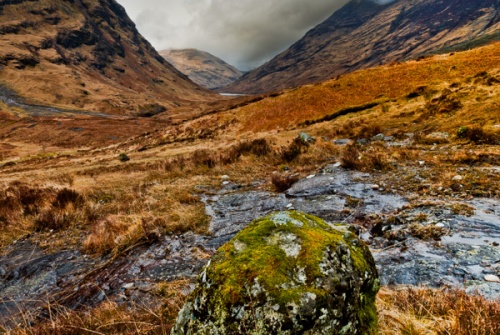 Glencoe offers over 4,000 acres (5665.5ha) of magnificent Highland landscape bisected with climbing and walking trails. The dramatic and beautiful mountain area was the site of the 1692 massacre of the MacDonalds by the Campbells.

There is walking information in the Visitor Centre (guided walks available). A well-marked footpath ascends Buachaille Etive Beag, one of Scotland's most popular mountains for climbers.

Fingal, the legendary Celtic hero of myth and legend was said to live in Glencoe. Fingal was the leader of the Feinn, a band of heroic warriors. Though Fingal may not be a real person, the name lives on in several place names around the glen, such as Dun-Fionn, 'the hill of Fingal' on the north, or Sgor nam Fiannaidh (rock of the Feinn). Finn's son was Ossian, or Oisin, sometimes known as Fionn mac Cumhail, which was later anglicised as Finn McCool. The name 'coe' may refer to the river Cona, where Ossian was said to have been born.

Fingal was said to have defeated the Viking leader Erragon of Sora, but the Viking influence could not be held at bay for long. The descendants of Erregon became the MacDougall clan, and the MacDougalls held control over Glencoe from the 11th century.

The clan built a strong base of power in western Scotland, but in 1308 they 'backed the wrong horse', or in this case, the wrong contender for the Scottish throne. The clan threw in their lot with the Balliol family against Robert Bruce. After Bruce gained the throne he awarded Glencoe to Angus Og, chief of the MacDonald clan. 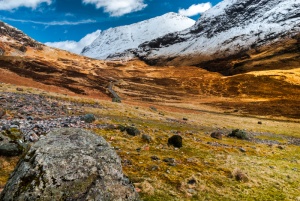 Looking down the glen

On 27 August 1691 William III offered a pardon to all Highland clans who had raided their neighbouring clans or fought against the crown. It was a pardon with a very important condition; clan leaders had to take an oath of allegiance by 1 January 1692 or face a penalty of death.

The chief of Clan MacDonald was MacIain of Glencoe. He did not want to take the oath of allegiance but felt he had no choice. However, he made a fatal mistake; he went to Inverlochy, outside Fort William, to take the oath, when he should have gone to Inveraray. When he arrived in Inverlochy to find the royal representative gone, he left for Inveraray but did not arrive until 6 January. He took the oath and returned to Glencoe, thinking he had assured the safety of his clan.

In a sequence of events that even now is open to interpretation, the government assembled a force of 130 men with orders to exterminate the entire MacDonald clan. As fortune would have it the government force was commanded by Captain Robert Campbell of Glen Lyon. Campbell marched his men to Glencoe and asked the MacDonalds for quarter.

The MacDonalds opened their home to the government troops, and for 10 days they entertained them. On 12 February orders reached Captain Campbell to kill every MacDonald under the age of 70. In the early hours of the next morning the Campbell troops rose stealthily from their beds and slew their hosts.

Forty MacDonalds were slain in the initial attack, and the rest escaped into the bitter winter snow, only to die of exposure amid the Glencoe hills. 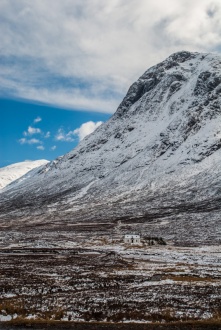 A lonely dwelling cowers
beneath a snowy peak

The massacre was not the largest loss of life in the long and bloody history of clan warfare, far from it. But it was the nature of the attack that still stirs feelings; turning unexpectedly on those who had opened their homes to old enemies and treated them as friends.

A monument to those who died in the attack stands in Glencoe village. Maclain was buried on the island of Eilean Munde, in Loch Leven. Signal Rock, near the Clachaig Inn, marks the spot where the order to begin the Massacre was given.

The first road through the glen itself was built in 1785 as part of government attempts to control the Highland clans. Population declined over the next century as the Highland Clearances forced people out in favour of sheep.

In 1935 the National Trust for Scotland bought over 12,000 acres of the glen to protect it from commercial exploitation. The Trust's holdings were extended gradually over the following decades until today it owns much of the glen and the surrounding area.

Glencoe village lies at the western edge of the glen, and a mile further west is Ballachulish. Both settlements have facilities for visitors and accommodation options. There is an official visitor centre at the western end of the glen, with information on footpaths and local outdoor activities.

There are 3 official campsites in the glen, and wild camping is allowed in some areas. Perhaps the most popular place to stay (at least for determined climbers) is the Clachaig Inn and its nearby campground, about 3 miles from Glencoe village. Between the inn and the village is a hostel run by the Scottish Youth Hostel Association. About 1 mile from the eastern head of the glen is the Kings House Hotel, a historic coaching inn.

The development of the West Highland Way long-distance trail has led to a large increase in the number of walkers in recent years. The trail follows the route of the old military road over Rannoch Moor and descends the glen along the Devil's Staircase down the glen.

On the east side of the glen is the Glencoe ski area, sometimes called White Corries. 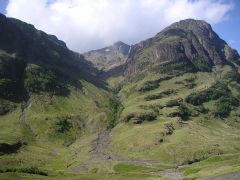 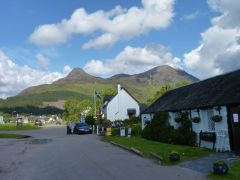 Nearby accommodation is calculated 'as the crow flies' from Glen Coe. 'Nearest' may involve a long drive up and down glens or, if you are near the coast, may include a ferry ride! Please check the property map to make sure the location is right for you.

More self catering near Glen Coe >> 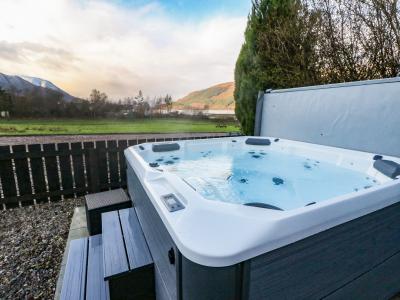