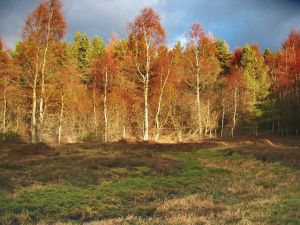 Muir o' Fauld Roman Signal Station
Muir o' Fauld is the site of a 1st-century Roman watchtower. Though somewhat overgrown, much can still be seen of the tower layout. The site stood in the midst of a forest, but this has now been cleared, giving a better idea of the site.

The site consists of a single earthwork bank with a ditch over three metres wide, enclosing an area about 16 metres diameter. The tower was square in plan and built of timber, with a post at each corner.

The area around Dundee and Perth is rich in Roman remains, with over 30 sites identifiable. Muir o' Fauld is one of the best-preserved of these, and one of several occupying the high ground of the Gask Ridge, where a Roman road can still be traced.