HERITAGE HIGHLIGHTS:   All that remains of the 'Church of the Disruption' 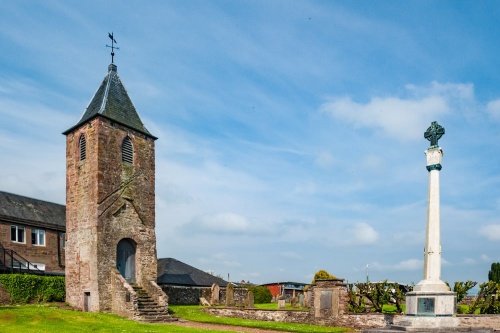 The slender bell tower is all that remains of a 17th-century church standing in a burial ground on Auchterarder's long High Street. The church was built in 1660 and was the third on the same site. It was dedicated to St MacKessog, a 6th-century Irish missionary and son of the King of Cashel, who came to Perthshire around AD 510.

The church is said to have been built with stones robbed from nearby Kincardine Castle after the castle was destroyed in 1646. Kincardine Castle was the seat of the Graham family of Montrose for over 300 years until its destruction.

More upheaval arrived in 1716, during the Jacobite rebellion, when soldiers led by the Earl of Mar laid waste to the Strathearn area following the Battle of Sherriffmuir. So dangerous was it that Rev William Reid of Dunning preached at Auchterarder Church with a loaded pistol strapped across his clerical robes. 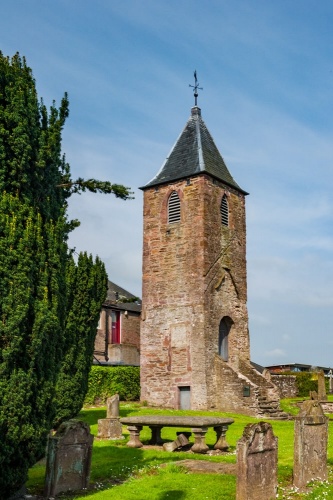 The tower from the south east

The Jacobite supporters, primarily the MacDonalds of Clanranald, reached Auchterarder during a fierce snowstorm and burned the town. The townsfolk retreated inside St MacKessog's Church for safety during the attack.

The church was extended in 1784, more than doubling its previous size. You can clearly see the old and new rooflines on the east wall of the tower, over the surviving doorway. The thickness of the lowest roofline remnant (the first roof) suggests that it was built of thatch. 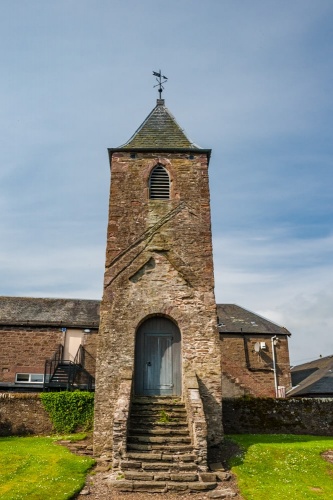 The tower from the east

The Church of the Disruption

Auchterarder Church was the setting for a pivotal moment in the history of the Established Church of Scotland. Tensions between Moderates (old) and Evangelical (new) church factions reached a breaking point in 1834 when the Session at Auchterarder refused to accept a new minister nominated by their Laird.

This break with tradition prompted a long battle through the courts which culminated on 18 May 1843 when a third of the ministers left the General Assembly to form the Free Kirk of Scotland.

This break was the single most important event in Scottish religion since Presbyterianism was established in 1690. From this point onwards the role of the church in local affairs diminished as the government took control of social affairs such as education and poor relief. 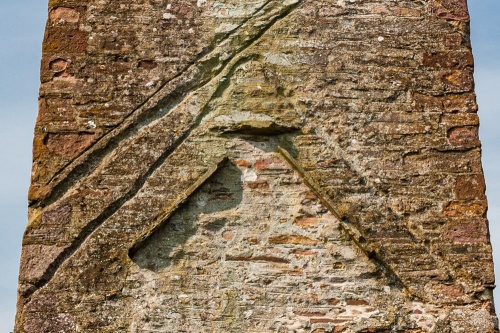 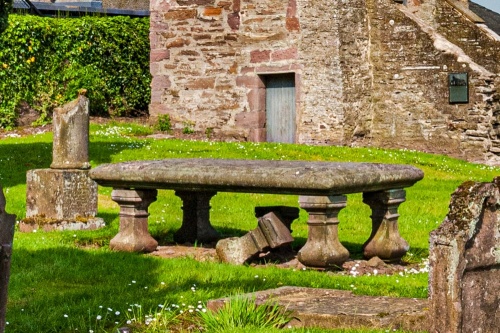 In 1904 a new and larger parish church was built on high Street and the old Church was pulled down, leaving only the tower standing amid its burial ground. In 1920 the striking war memorial was built in the former church nave and a flight of steps was added leading to the tower entry.

The tower was restored in 2004 and the outline of the enlarged 1784 church was marked by a series of stone slabs on the ground.

The tower is a simple structure on a square plan, made with local rubble stone, with a Gothic-inspired window in each face and an arched doorway, reached by a short flight of stone steps. The tower is topped by a pyramidal roof. 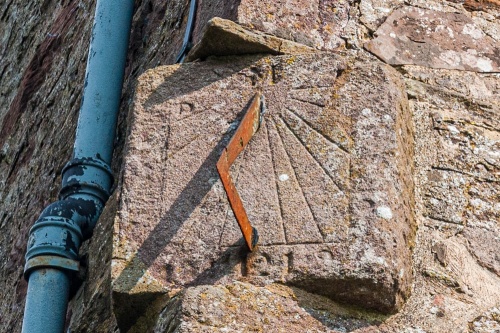 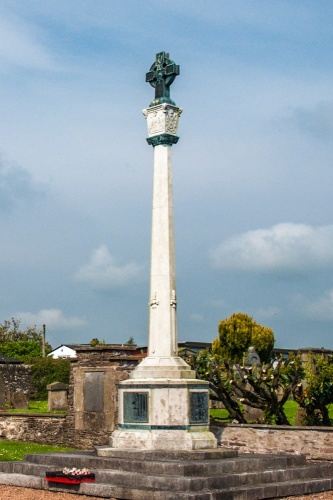 There is a blocked doorway on the south face of the tower, and an old sundial set into the south-west angle.

There are several interesting 18th-century gravestones in the surrounding burial ground, and there is an interesting information panel giving details of the church's history, erected by the Perth & Kinross Heritage Trust. 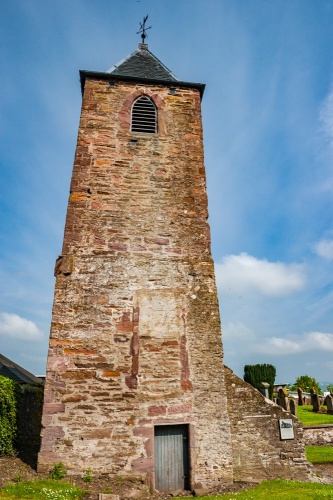 Another view from the south

The Old Church Tower is very easy to find. It stands in a walled burial ground on the north side of High Street, a few doors west of Aytoun Hall and flanked to the east by New School Lane. It is easy to find parking along nearby streets.

Self Catering near Auchterarder