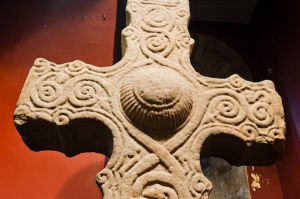 Dupplin Cross
The Dupplin Cross is one of the finest and most complete early Christian crosses in Scotland, and one of the high points of Pictish sculpture. The free-standing cross dates to the 9th century and is carved from a single block of red sandstone. The carvings represent warriors, interlaced geometric patterns, knots, spirals, and a peculiar figure playing the harp, which may be a depiction of King David.

For many years the cross stood in the grounds of Dupplin Castle, beside the site of the Pictish royal residence of Forteviot. Perhaps it was associated with the former royal estate, for the carvings that adorn all four sides depict ancient ideals of kingship, from religion to military might.

The truly unique feature of the Dupplin Cross is that names a king, Constantine, who ruled from 789-820 AD. This is the only known depiction of a named king in Pictish art, but it means the cross can be dated with historical certainty to the period around AD 800.

One fascinating feature is that the cross also depicts the Biblical King David, playing the harp. The king is clearly associating himself with the idealised Biblical portrayal of a king, and at the same time associating the position of kingship with religious importance. It is a statement asserting the king's secular and religious power.

The artistic style of the cross is a mix of Pictish and Scottish style and bears similarities to the flourishing Northumbrian school of carving further south. The rear of the stone has the longest known Roman inscription in early medieval Scotland. 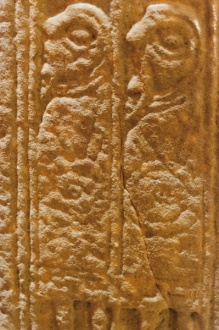 The cross head is based on a prominent central boss, with vine scrolling on all sides, inspired by Northumbrian carving. Below the cross-head is the solitary figure of a rider, probably representing Kong Constantine. His head is huge in proportion to his body, and he bears a large moustache. Together these touches show his importance and authority.

Below Constantine are four warriors carrying spears and shields. In contrast to the king, the warriors do not wear moustaches and wear plain clothing. At the base of the east face is a hunting dog in the act of chasing prey. The depiction of hunting scenes is a common theme in Pictish art (see, for example, the wonderfully carved stones at Aberlemno).

The cross-head is carved with interlace and abstract geometric designs. Below is a serpent, above the figure of King David playing his harp, and at the bottom is more interlace carving.

Like the north side, this has interlace design on the cross-head and arm, above two beasts facing each other. Below are a pair of senior warriors, their status inferred by the fact they wear moustaches.

Like the south face, the cross-head has geometric patterns and vines around a central boss. Below this is the unique feature of the Dupplin Cross, a Latin inscription dedicating the cross to 'Constantine, son of Fergus'.

Below the dedication is a roundel between for pairs of doves, while at the base is a fascinating, though worn, scene in which a naked figure and a dog face a lion. This probably represents King David again, and once more indicates how the cross was meant to link the temporal power of the king with the religious power of the Biblical King David.

The cross stands on a plinth which bears an Irish Ogham inscription, another indication of the mix of cultures in Scotland at this time.

The Dupplin Cross stands under the tower of St Serf's Church in Dunning village, an extremely picturesque medieval building. The tower dates to the 12th century, but the church first enters the historical record in 1219, when it was owned by the Abbey of Inchaffrey. 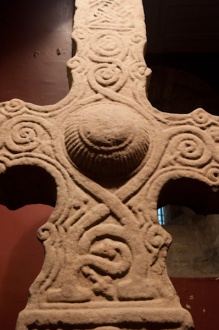 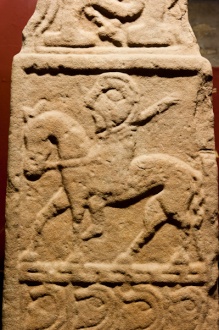 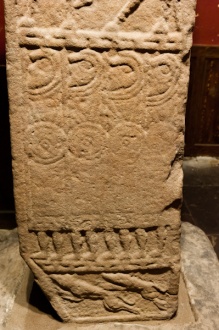 Warriors and a hunting dog
(bottom) 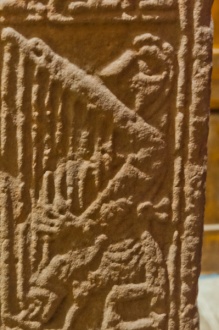 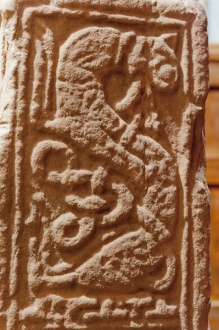 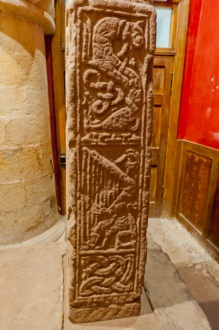 I apologise for the fact that there are no images of the west face of the cross. The light through the tower window so bright that it wasn't possible to get decent images without absurd amounts of glare. Maybe next visit!

More self catering near Dupplin Cross >> 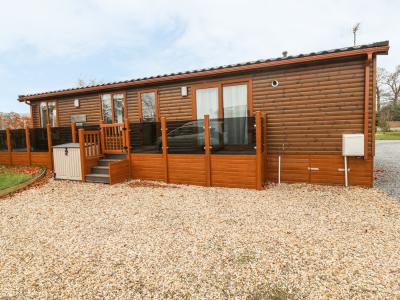 A detached lodge located in the village of Dunning. It can sleep up to four people in two bedrooms.
Sleeps 4 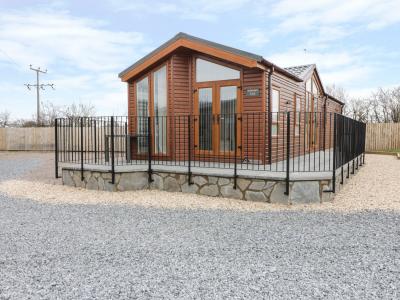 This lodge is located close to the village of Dunning near Perth and can sleep four people in two bedrooms.
Sleeps 4