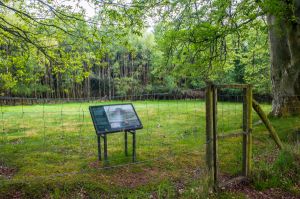 Ardunie Roman Signal Station
One of several Roman sites atop the Gask Ridge west of Dundee, Ardunie is a watchtower dating to the 1st century AD, when Roman troops pushed north into present-day Scotland and made a concerted effort to bring the area under Roman control. They built a series of signal stations like this, stretching from Ardoch and the River Tay.

The tower was unearthed in 1937 by Professor OGS Crawford, who discovered a central platform about 39 feet in diameter, located immediately south of the Roman road running along the ridge. The signal station consisted of a timber tower, with walls made of wattle and daub. The tower had a balcony where a lookout kept watch and was defended by a rampart of earth and a ditch. Only the ditch and outer bank remain today.

Seventeen watchtowers have been found between Ardunie and Bertha, located to give good views to both the north and south. The towers are situated 1-1.5km apart. The frontier would have had a cleared section of ground around it, to make sure no one could approach without being seen.

The Historic Scotland website says that the trail to Ardunie is not signposted, but when we visited we certainly saw a sign, where the minor road north of Trinity Gask takes a sharp right bend. There is space for one or two cars to pull off to the roadside. The path is as straight as an arrow, heading east along the field boundary.

There's a reason it is so straight; it follows the original Roman road along the ridge! Just keep on for just short of a mile and you will see the signal station come into view in a clearing in the forest to the left of the path. There is an information panel with a map of the site layout.

It is somewhat difficult to make sense of the site, as it is entirely covered in turf, but you can see the outline of the earthwork walls and ditches, and the information panel helps understand what you are looking at. This section of the Roman road has remains of several signal station, but only Ardunie is maintained so you can get a sense of what they must have looked like when built. 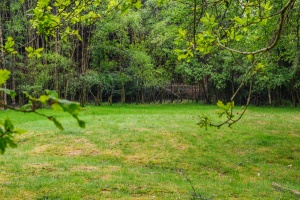 The earth bank and ditch 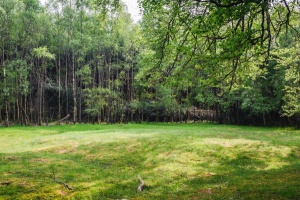 The signal station from the site entrance 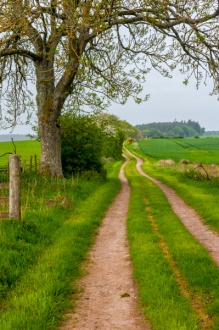