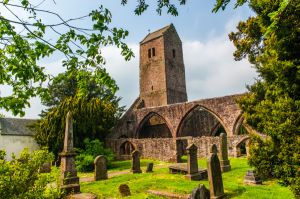 Muthill Old Church is a 12th century medieval church with a tall Romanesque tower, all that remains of an important early Christian site linked to the cathedral at Dunblane.

In 1170 a monastery for the Culdees order was founded at Muthill. The Culdees lived a simple monastic life, but they were not isolated from worldly society like some other orders. They were free to mix with the local community.

The Culdee foundation was linked to the Cathedral at Dunblane and it seems likely that the Bishops of Dunblane occasionally used Muthill church as a substitute cathedral. That might explain why Muthill church came to have such an imposing bell tower, which would seem far too grand for an ordinary parish church. The tower was built in the mid-12th century. 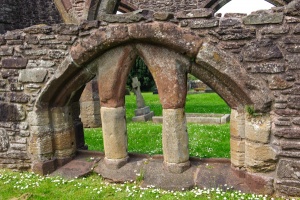 The Culdee community remained at Muthill until the 13th century when a dispute broke out between the Bishop of Dunblane and the Abbot of Lindores over ownership of the site. The Culdees departed, but the church lived on. The nave and chancel walls date from the 15th century, and a pulpit was added after 1560 in accordance with the new Protestant style of worship. The church abandoned in the 1820s and stones used to build the nearby parish and Episcopal churches.

The most impressive parts of the church are the bell tower and the nave arches. The door in the tower is kept locked, but if you peer through the opening you will see the effigy of Sir Maurice Drummond (d. 1360) and his wife Ada, daughter of Henry Seneschal of Strathearn. A memorial tablet to the pair was erected in 1880 by their descendants, the Drummonds of Megginch. The tablet is set against the north wall at the east end of the church.

The church is located on a sharp curve in the road in the centre of Muthill, so keep your eye's open as you approach! There is no parking directly at the church, but there is a small free parking area opposite the current parish church, below the museum, off Station Road. 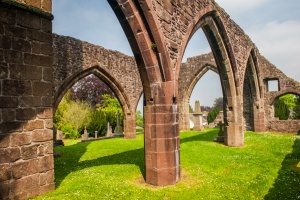 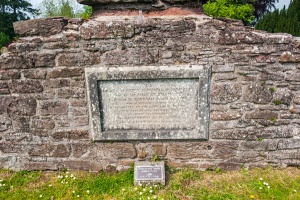 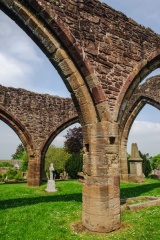 Another look at the
15th-century arcades