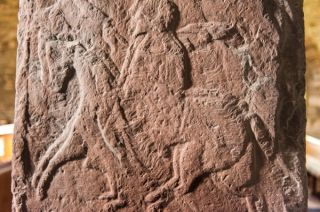 St Bean's is a restored 13th-century church with a medieval leper's squint - a special window for lepers to watch the service. In the north transept is the Fowlis Wester Sculptured Stone, a Pictish cross slab dating to the 8th century.
The Sculptured Stones
There are actually two crosses preserved inside the church. The larger and more famous depicts a pair of horsemen and animals on one face, and on the reverse, a man leading a cow, followed by a half-dozen other men. We are not certain what meaning to give to the sculpture - perhaps it was simply a depiction of daily life.

The image of the man leading a cow is unique in Pictish art; no other images of a similar scene have been found. Above the rural scene are several Pictish symbols, including a Z-rod and double disc. Below the cow scene is a V-rod and crescent, while at the base is a man being eaten by a strange beast.

The stone is enormous; it stands 3 metres high (roughly 10 feet) and is made of red sandstone. On one face is a cross carved in relief with arms that project 5cm beyond the sides of the slab. This gives the impression that it is a free-standing cross, which it is not. This is thought to be the only stone in Britain using this style.

Behind the large cross, set against the wall, is a smaller stone. This has a highly stylised Celtic cross with a carving depicting two seated priests above several standing priests. Above the cross is a carving of Jonah and the whale. The carving is better preserved than the larger stone and it is quite easy to make out the carvings.

In the village square beside the church is an exact replica of the large cross, so that if the church is closed you can still get a sense of what the cross looks like.

St Bean's Church
There has been a church on this site since the 8th century when the Irish missionary St Bean (d. 720) preached in this area. The present building is 15th century, rebuilt in 1927. The restored church thankfully retains many of its original medieval features, including a leper's squint, a small window angled so that lepers outside the church could gain a view of the high altar during church services. The church is normally open daylight hours. 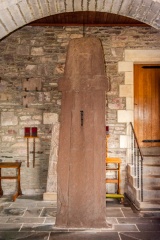 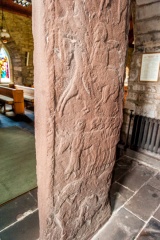 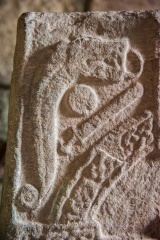 Pictish carving on the
smaller stone 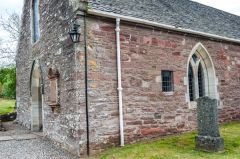 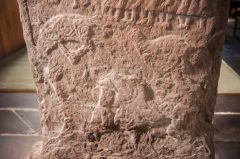 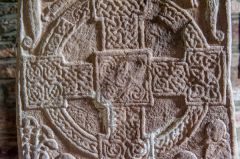