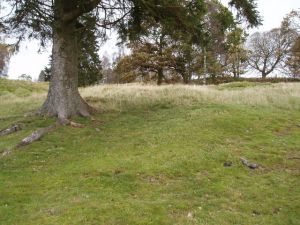 Blackhill Roman Camp
There are a pair of Roman marching camps at Blackhill, dating from the early 3rd century AD. The camps are in the care of Historic Scotland, though the absence of signage rather diminishes potential interest in the site.

The marching camps were built during the campaigns of the Roman emperor Septimius Severus in the early 3rd century. Severus was emperor from AD 193-211. He came to Britain late in his reign and here he refortified Hadrian's Wall and reconquered southern Scotland up to the Antonine Wall. He garrisoned the Wall and planned to extend his territory beyond it into Caledonia.

In AD 208 he marched north of the wall at the head of 30,000 men, the largest army to ever invade Scotland. However, before he could complete his conquest he fell ill and died. His son Caracalla briefly carried on the campaign but soon settled for peace and withdrew his troops.

The camp at Blackhill was a temporary site built to provide shelter for the Roman army on campaign. It covers roughly 53 hectares (about 131 acres). It was probably built in a single day, perhaps no more than an afternoon. The army would have occupied the site for no more than a few days before moving on.

Nearby are the remains of several smaller camps, a watchtower, and the earthwork fort at Ardoch, just outside Braco village itself.

The camp is located north of Braco off the A822 road to Crieff, just past the junction with the B827 to Comrie. Keep your eyes open; the camp is not well signposted.