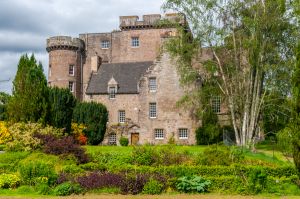 Monzie Castle is really two historic buildings joined together. The oldest part of the castle is a three-storey, L-shaped early 17th-century tower house, while the newer part is a castellated country house built in 1795. The castle was badly damaged by fire in the 20th century but was subsequently rebuilt and used as a family home.

The older house is almost completely unaltered externally. The date 1634 is carved into a stone over a doorway of the wing, making this the most likely date of building. The arms of the Campbell and Graham families are carved on the date stone.

In the interior is an impressive fireplace, also dated 1634, which features a large lintel inscribed with swags and a coat of arms. Garderobes built into the thickness of the walls in the west wing suggest that there was an earlier fortalice here before the current house was built.

The 18th-century mansion was built by architect John Patterson, and rebuilt in 1909 by Sir Robert Lorimer. It is also 3 storeys high, with 34 corner towers and a 4-storey centre block. The interiors feature rich plasterwork, carved panelling, and a pair of marble fireplaces.

We came to Monzie on a dull spring day, but our first sight of the castle brightened our spirits considerably! The approach to the castle is a long, narrow, drive that winds through gorgeous countryside, and you seem to be going deeper and deeper into nowhere before the castellated tower of Monzie peeks over the horizon.

We were the only visitors that afternoon, and the owner took us around the house by herself. It was a lovely, personal touch, and she clearly had a great affection for the house.

We saw several of the main 19th century rooms and heard stories about the families that had owned the castle over the years, and the personalities of the family members. We heard how one owner bought the house site-unseen and had his agent fill it with books purchased in bulk so the library shelves would not look bare.

Then it was off to the older part of the house, and goodness, what a change in atmosphere, from the elegance of the Victorian rooms near the entrance to the more starkly furnished rooms in the oldest part of the building.

We had a lovely tour, and enjoyed ourselves thoroughly. After that, we were free to wander around the gardens behind the house. There is a small area of formal garden with curving hedges creating pathways through raised beds of flowers, and a quiet walk around a small lake with glimpses of the castle through the trees.

Monzie is a delight; it is not a grand house or a grim fortress, but it has glimpses of both. 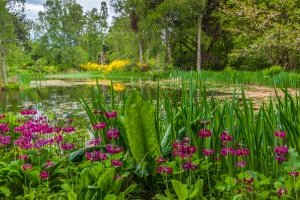 A beautiful lake walk in the garden 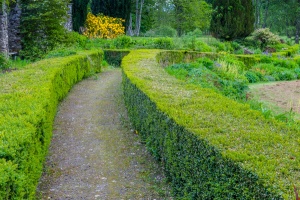 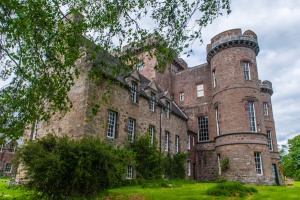 The side wing and tower of Monzie Castle 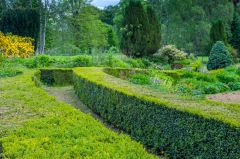 More self catering near Monzie Castle >> 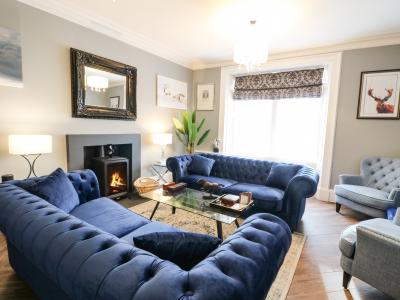 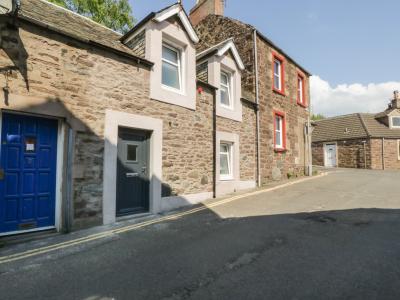 This charming mid-terrace cottage rests in Crieff, Scotland and can sleep two people in one bedroom.
Sleeps 2