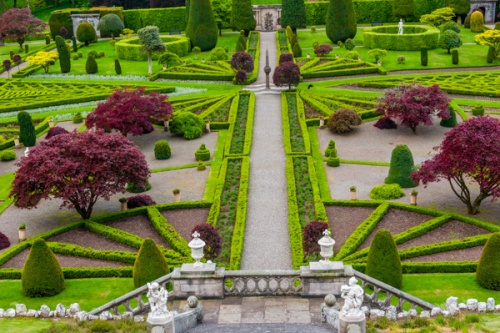 Drummond Castle is home to Scotland's most impressive formal gardens, approached by a beech lined drive. The gardens, first laid out in the 17th century, are designed in the Italian parterre style with a sundial in the middle. The surrounding woods were used in the film, 'Rob Roy'.

Around 1490 John, the 1st Lord Drummond, began building a castle on a rocky hill south of Crieff. We do not know what sort of gardens Lord Drummond planted, but there must have been an orchard at least, for in 1508 he sent cherries to James IV, who was hunting in nearby Glen Archty Forest.

It was left to his descendant, the 2nd Earl, to create the wonderful formal gardens below the castle, beginning around 1630. The 2nd Earl served as Privy Councillor to both James VI and Charles I and not only transformed the gardens into the showpiece we see today, but rebuilt the medieval castle into an elegant stately home.

Later that same century the 4th Earl began an enormous planting project; an avenue of 4 rows of trees leading from the castle to Perth, 20 miles away. 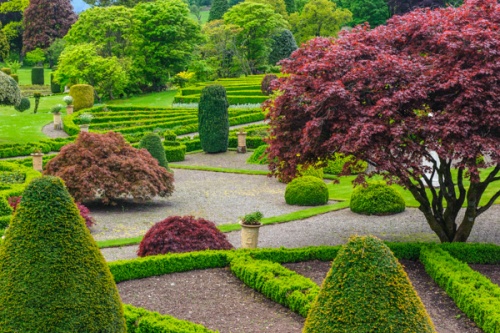 The gardens suffered during the early years of the 18th century after the 2nd Duke of Perth became embroiled in the Jacobite Rebellion of 1715, and improvements had to wait for the 3rd Duke took control. Unfortunately, Drummond support for the Stuart cause meant that the estate was confiscated following the 1745 Jacobite Rising.

It was not until the early 19th century that the formal parterre and terrace gardens were re-established under the direction of Lewis Kennedy, who had been employed as a gardener by Empress Josephine in France. The improvements made by Kennedy must have been impressive, and his French training evident, for after Queen Victoria visited in 1842 she wrote that the garden 'is really very fine, with terraces, like an old French garden'.

Today's visitors approach along the mile-long beech avenue off the A822. From the parking area you walk to the castle forecourt and pass through the iron-barred gateway to the inner courtyard, and on to the top of the terrace. The view from this point must be one of the most glorious vistas of any British garden. It is simply breathtaking, especially if the trees have started to show their Autumn colours. 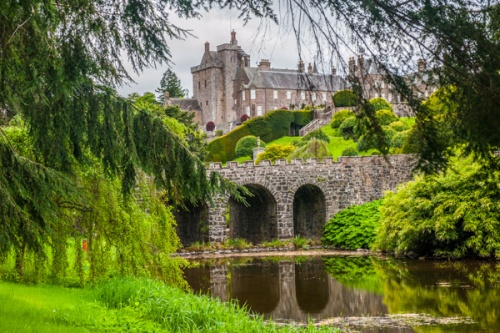 The old bridge and Pool

From the terrace, you can easily make out the St Andrew's Cross pattern made by the parterre beds, with the 17th-century sundial acting as a focal point in the centre of the design. Broad steps lead down to the sundial, and the main avenue leads on through a neo-classical gateway, through woodland to a distant hilltop. Throughout the garden are lovely topiary, fountains, and statues acting as eye-catching points of interest. At one end is a pool leading to a lovely bridge that was once part of the main access drive to the castle.

It is easy to sound enthusiastic about Drummond Castle Gardens, for they are easy to get excited about! Drummond is a must-see if you enjoy historic gardens. Unfortunately, the castle itself is not usually open to visitors. 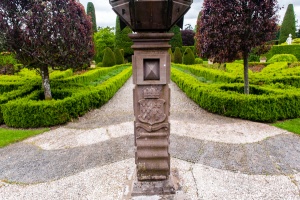 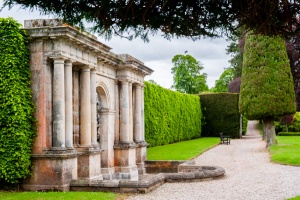 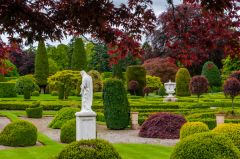 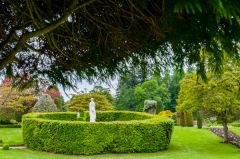 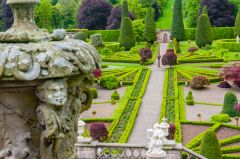