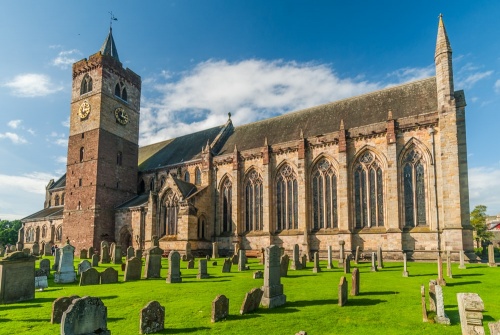 Dunblane Cathedral is one of Scotland's oldest and most important surviving medieval churches. The cathedral was founded about 1150 by King David I. The oldest and most striking part of the cathedral building is the 12th-century tower, built of red sandstone which stands out beside the more subdued remainder of the church. 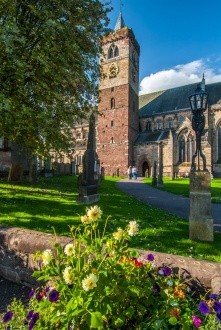 The tower is rather unusually located, not at the west end or at a central crossing point, but above the south aisle. Another exterior feature is the west front, carved in Gothic style to create a grand processional entrance to the church.

One remarkable feature is that the nave walls are more worn and weathered inside than out. That's because the nave stood for more than 3 centuries without a roof!

The first church at Dunblane was probably built in the 7th century, possibly by monks from the Isle of Bute, who came here carrying the bones of St Blane after their island home had been raided by Vikings. The first cathedral was built in the early 12th century, and the first record of a bishop comes from 1155. 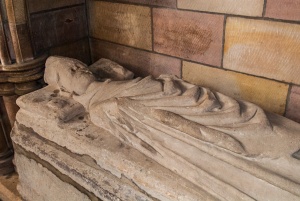 In 1816 architect James Graham was called in to restore the chancel. It was not until 1886 that the congregation grew too large for the chancel, that the nave was restored under the direction of Sir Robert Rowand Anderson. The interior stretches 210 feet, with simple, soaring lines. The great East window has stained glass depicting the Biblical Tree of Jesse. In the south aisle is a tomb recess containing the effigy of a bishop. This is thought to represent Bishop Michael Ochiltree, who entered the pages of history when he officiated at the coronation of James II at Holyrood in Edinburgh in 1437. 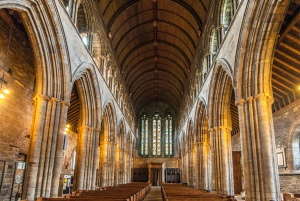 In the north aisle is a 9th-century Celtic cross bearing a cross incised on one face and allegorical figures on the other, including a hunting scene with a horse, wolf, and other peculiar animal figures. There are 13th-century effigies of the Earl and Countess of Strathearn, dated 1271.

One feature that really stood out for me is the wonderful vaulted ceiling of the chapter house. This may have been the first part of the church to be built; used as a place to worship until the rest of the building was finished. There are wonderful misericord carvings in the 15th-century choir, including the figure of a Green Man.

The most recent addition to the church is a moving memorial to the victims of the 1996 Dunblane Massacre when 16 local children were killed by a lone gunman while attending Dunblane Primary School.

The memorial, a simple rectangular slab inscribed with 4 heartbreaking verses on the theme of childhood, stands in the south aisle. It was carved by Richard Kindersley of London, using a slab of Clashash sandstone on a base of flagstone from Caithness.

This a beautiful medieval church, a wonderful example of Gothic architecture, and an absolute delight to visit. Our family has been twice - once in the rain, and once in glorious summer sunshine. It was a wonderful experience on both occasions! 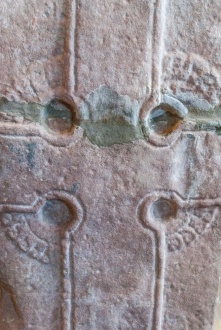 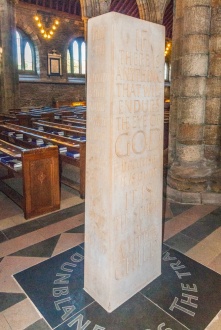 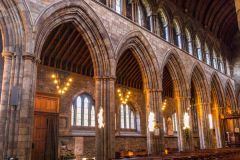 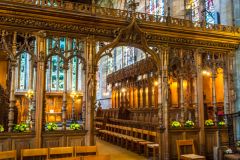 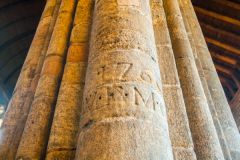 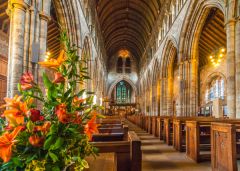 More self catering near Dunblane Cathedral >> 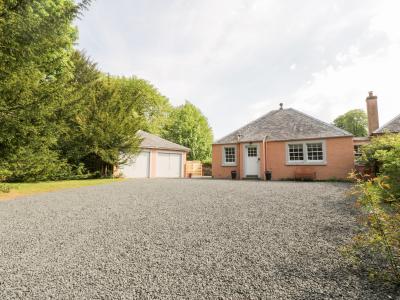 This annexe cottage rests in Kippenross near Dunblane and can sleep two people in one bedroom.
Sleeps 4 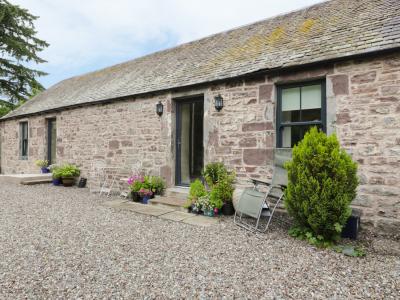 This delightful end terrace cottage is situated in the grounds of the owner's castle near to the town of Dunblane and can sleep four people in two bedrooms.
Sleeps 4