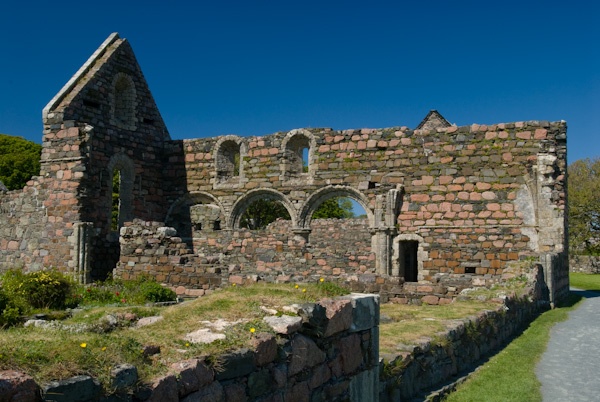 Most visitors to Iona come to see the historic abbey, founded around 1200 and restored in the 20th century. However, just a short stroll from the ferry quay at Baile Mor stands the ruins of one of the best-preserved medieval nunneries in Britain. The nunnery stands beside the main pilgrim's route from the landing-place at Baile Mor along the 'street of the dead' to St Columba's shrine and the abbey.

While the abbey was founded according to the Benedictine rule, the nunnery was established for an order of Augustinian nuns, though the same Regnald, son of Somerled, was responsible for establishing both monastic foundations, and Regnald's sister Bethoc served as the first prioress of Iona. The nunnery church was called 'the black church', a reference to the black habits worn by the nuns.

Iona Nunnery became a popular place for ladies of noble birth from the entire Argyll region to retire, and many noblewomen were buried here. In the chancel lies a much worn grave slab to Prioress Anna MacLean (d. 1543).

The ruins of the 13th-century church are by far the most substantial building on the site. The church stands on the north side of a cloister and consists of an aisled nave, chancel, and north chapel. The architectural detailing is very attractive, with finely carved arcade capitals.

The buildings on the east and south ranges of the cloister are in a much poorer state of repair. Fragments of carving from the cloister arcade can be seen in St Ronan's Chapel (Teampull RÃ²nain) nearby.

The chapel served as the parish church until the Reformation. Excavations at St Ronan's revealed traces of an 8th-century chapel on the site.

This early chapel would have existed at the same time as the original monastery on Iona founded by St Columba. The chapel now acts as a museum for artefacts discovered during archaeological investigations at the nunnery.

There is a peaceful air about Iona Nunnery. Perhaps too many visitors scurry by on their way to the more famous attractions at the Abbey, leaving the nunnery to slumber on, undisturbed.

Nearby accommodation is calculated 'as the crow flies' from Iona Nunnery. 'Nearest' may involve a long drive up and down glens or, if you are near the coast, may include a ferry ride! Please check the property map to make sure the location is right for you.

More self catering near Iona Nunnery >>