HERITAGE HIGHLIGHTS:   Ties to the famous Beaton family of physicians 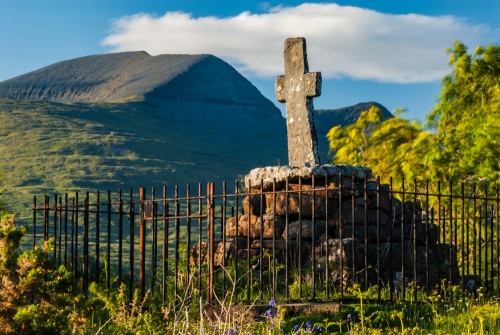 Rising from a stone base, a free-standing Latin cross looks north over Loch Scridain from an enclosure framed by metal railings, just west of the Free Church of Pennyghael on the road from Pennyghael to Bunessan. The cross probably dates to the 8th century, but was later reused as a memorial to the famous Beaton family of physicians who lived at nearby Pennycross in the 16th century.

The cross is variously known as 'Crois an Ollaimh', the Beaton Cross, the Cross of the Physician, or the Pennycross Cross. It consists of a crosshead of Moine granulite about 1.3m (4.25 feet) high supported on a modern base. What we see today is just part of a much larger cross that has been broken off. The bottom of the cross shaft extends a further 0.57m (1.9 feet) into the base.

The west face of the cross is plain, though sadly defaced by modern graffiti, while the east face is inscribed with the initials GMB and DMB separated by the date 1582 (some sources say 1589). The initials are thought to refer to Gille-Coluim MacBethadh and his son Domnall, two members of the Beatons of Pennycross. Until the 17th century, the Beatons often used the surname MacBethadh. 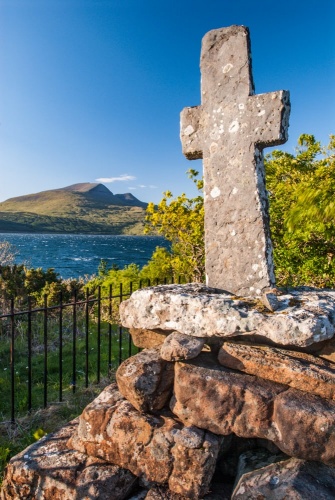 The Beaton Doctors of Mull

The Beatons of Mull, or 'Ollamnh Muileach' in Gaelic, were a family of hereditary physicians to the MacDonald Lords of the Isles and later, to the MacLeans of Duart. The Beaton Doctors trace their origins back to France, and were said to be blessed with an extraordinary healing ability. They are said to have established a centre for medical learning at Pennycross.

Legends about the Beaton's healing ability abound. One physician cured a Lochbuie clan chief of a throat abscess by making his attendants drink a foul-tasting mixture. The attendants' grimaces as they drank the vile 'medicine' made the chief laugh, and the laughter broke up the abscess.

Tales of the Beatons' ability to heal reached the ears of the Scottish king, who invited John Beaton of Mull to his court at Edinburgh. He also invited leading doctors from across his realm, in order to find out which doctor was the best.

The king feigned illness and challenged the doctors to cure him. Beaton was the only one to see through the king's trick and proclaim that nothing ailed him. The impressed king named Beaton the finest physician in Scotland. His rivals, however, were furious, and poisoned Beaton, who was then buried on Iona.

The Beaton Cross is extremely easy to find. It stands within an obvious enclosure north of the coast road about 800m west of the minor road to Carsaig and just west of the Free Church. There are no road signs pointing to the cross but we found it easy to see as we drove along the road.

Nearby accommodation is calculated 'as the crow flies' from The Beaton Cross. 'Nearest' may involve a long drive up and down glens or, if you are near the coast, may include a ferry ride! Please check the property map to make sure the location is right for you.

More self catering near The Beaton Cross, Pennycross, Mull

More bed and breakfasts near The Beaton Cross, Pennycross, Mull