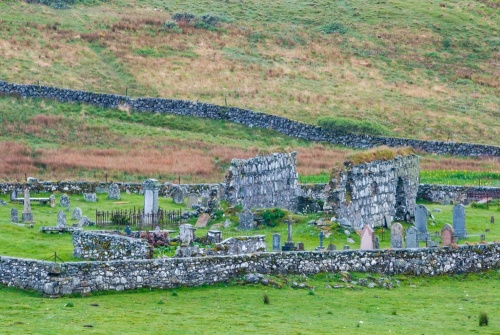 Just east of Loch Assapool on the beautiful Ross of Mull stand the ruins of the Old Parish Church of Kilvickeon. The ruined walls of the 12th-century church stand within a stone-walled burial enclosure. Kilvickeon Church is dedicated to Ernan, the son of Eoghan, St Columba's nephew.

The church is one of just seven medieval churches on Mull and may stand on the site of a much earlier Christian site. After the Reformation Kilvickeon formed part of one huge parish taking in all of Mull, before it was split off again as part of a large parish that included Kilcolmkill and Kilninian. From 1720 it was part of a parish taking in the entire Ross of Mull peninsula.

The medieval building was recorded as being in a poor state of repair as early as 1795. In the early 19t century a new church was erected in Bunessan, using stones robbed from the old church, and the old church was left to decay. 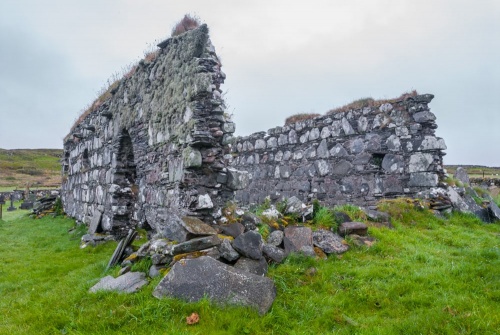 The church from the north-east

The medieval building was recorded as being in a poor state of repair as early as 1795. In the early 19t century a new church was erected in Bunessan, using stones robbed from the old church, and the old church was left to decay.

The church is roughly 13m long by 5.7m wide and is oriented east to west. The north and south walls are largely intact but the east and west walls stand only 1m high.

The round-arched church entrance is in the north wall. High on the wall beside the entrance is a carving thought to be a sheela-na-gig, one of only five such carvings to survive in Scotland. Sheela-na-gigs are -- probably -- a form of fertility symbol, perhaps a whisper of Pre-Christian Mother Goddess worship. 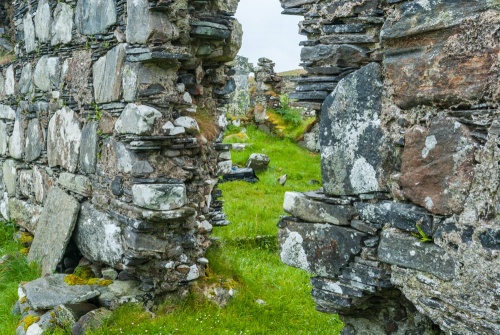 The church structure is very simple. I've already mentioned the round-headed arched doorway in the north wall. There is a single window opening in the north wall, opposite a similar opening in the south wall. It seems likely that there were similar window openings in the east and west walls, though so little of these walls remain that it is impossible to know for sure.

It is very likely that the church was thatched, for you can see small stone pegs that would have been used for securing the roof with ropes against high winds.

You can see small holes set into the north and south walls. These holes probably supported a wooden screen, but if so, the screen was at an angle, for the holes are not directly opposite each other. 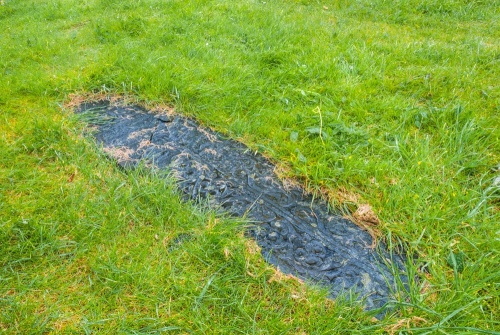 The Mariota Stone (before it was stolen!)

Until recently the main historical feature at Kilvickeon was a 16th-century floriated grave slab embedded into the earth of the nave. This stone was inscribed with the Latin phrase 'HIC IACET MA/RIOTA [FIL]IA ...' which translates as 'Here lies Mariota, daughter of ...'

This grave slab was, unfortunately, stolen and has not been recovered. Thankfully, the theft occurred after our visit, so we can share a photo of the stone in its original location. We feel very fortunate to have seen and photographed the stone in situ before it went missing!

A replica of the Mariota Stone now stands in a protective case near the graveyard entrance and a plaque marking its original location can be seen near the south wall of the nave.

The burial ground is roughly oblong in shape, but the original medieval enclosure would have been roughly circular. You can see traces of the medieval outline in the southern part of the walled enclosure. 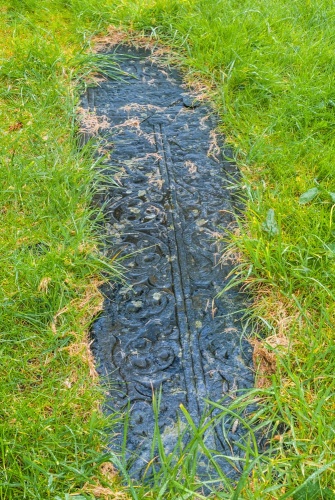 A closer look at The Mariota Stone

The burial ground has a wide range of grave markers dating from the late medieval period to the 21st century, including several 18th-century altar tombs. Most, of course, are made of stone, but we found one grave marker of corroded metal.Near the eastern wall are a pair of graves to two unknown sailors with the Merchant Navy who died off Mull during World War Two. These graves are maintained by the Commonwealth War Graves Commission. The most striking memorial is a tall 19th-century monument in the form of a Celtic cross. 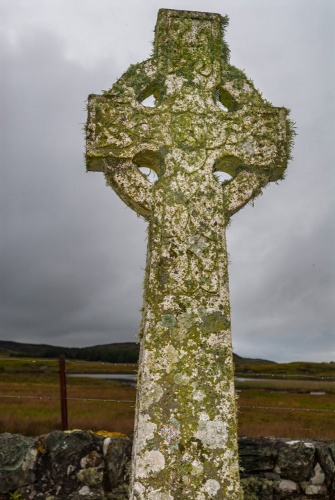 Kilvickeon Church is accessed off the A849 east of Bunessan. Take Scoor Road just west of the school and follow it past the eastern end of Loch Assapool. You will pass a water treatment plant, at which point the road becomes an unpaved track. Follow the track to its end where there is a small parking area. The church will be to your right. Be aware that the path to the church can be muddy, and please close farm gates behind you!

Our heartfelt thanks to the excellent Mull Historical Society website for some of the details in this article.

Nearby accommodation is calculated 'as the crow flies' from Kilvickeon Old Parish Church. 'Nearest' may involve a long drive up and down glens or, if you are near the coast, may include a ferry ride! Please check the property map to make sure the location is right for you.