HERITAGE HIGHLIGHTS:   Composer Felix Mendelssohn was inspired to write his Hebridean Overture after a trip to Staffa 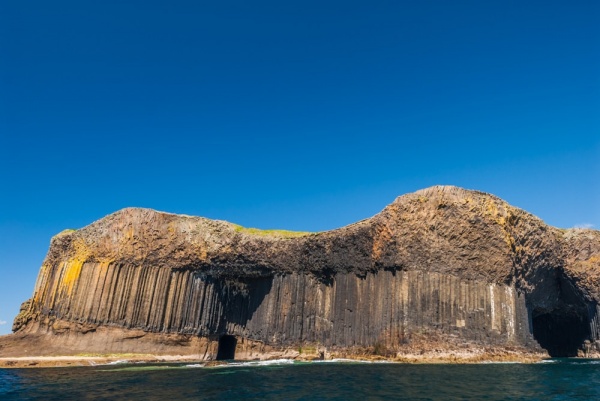 Staffa is an uninhabited island near Iona, famous for its striking basalt rock formations, including stepped columns, and Fingal's Cave, supposed home of the legendary giant Fingal. The island is accessible by regular boat charter from Fionnphort, on the Ross of Mull, from Ulva Ferry, on the west coast of Mull opposite the isle of Ulva, by day tour from Oban, and from nearby islands. 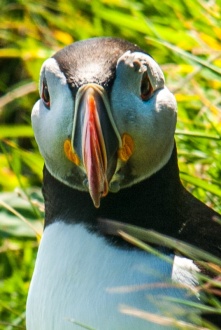 A Staffa puffin looking
straight at my camera

Staffa is also known for its bird life, including a regular population of puffins. These popular birds can easily be found nesting in grassy areas atop the island's high cliffs and are best viewed in spring and summer. The largest colony is on the cliffs above Goat Cave on the north-eastern coast of the island.

Plants flourish in the fertile soil formed from the volcanic lava. Plants like trefoil, tormentil, and wild thyme abound in summer, turning the landscape into a lush carpet of colour.

As you explore Staffa you will notice evidence of rig and furrow field cultivation and several ruined stone buildings. This shows that there was farming on the island from an ancient age, but whether there was any permanent settlement or just seasonal agriculture we do not know. You can also see the remains of a 19th-century folly created during the Victorian period when Staffa became a popular destination for tourists.

The highlight of a visit to Staffa is Fingal's Cave, also known as An Uamh Binn (Cave of Melody). A path leads from the boat landing area, along the very edge of the basalt rocks that make up Staffa, to the huge cave mouth. The cave is only 12 metres at its widest point and is supported on slender basalt columns. Inside, the sheer height of Fingal's Cave seems more suited to a cathedral. It is a truly magical place, formed by volcanic action millions of years ago.

The cave has astonishing acoustical qualities (try humming or chanting out loud). The acoustical resonance within the cave inspired composer Felix Mendelssohn to create his 'Hebrides Overture'. Mendelssohn was not the only famous visitor; JMW Turner painted the caves and helped popularise it as a destination for travellers. Queen Victoria made a royal visit and writers Lord Tennyson, Jules Verne, Robert Louis Stevenson, William Wordsworth and Sir Walter Scott all made the voyage to see the caves. 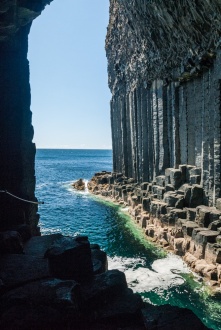 Looking out the mouth
of Fingal's Cave

These famous visitors followed in the footsteps of botanist Joseph Banks, who first publicised the wild beauty of the island in 1772.

The entire island of Staffa is a National Nature Reserve, owned by the National Trust for Scotland. Grey seals are often spotted nearby, as are dolphins and minke whales.

Staffa is very small, measuring just 0.5 miles long and .25 mile wide. That makes it easy to explore in a few hours. Fingal's Cave is a 10-minute walk from the boat jetty and the puffin colony is roughly 20 minutes in the other direction. Be aware that there are no visitor facilities on Staffa.

Our family visited Staffa on a day trip from Fionnphort. We were lucky that the weather was calm and the day was sunny. We only had a couple of hours ashore, so we walked first to Fingal's Cave, and lingered there to photograph the cave and try out the acoustics. Then we scuttled back to the jetty and took the trail north along the cliffs to see the puffin colony. We were lucky to see several of the puffins entering and exiting their burrows. They were a bit shy but we were able to get close enough to photograph them. I highly recommend a good telephoto lens! 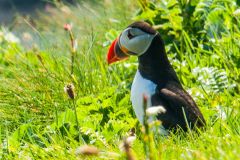 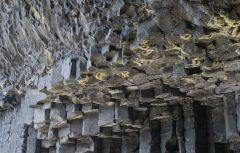 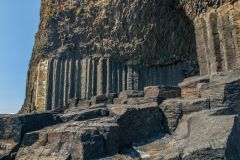 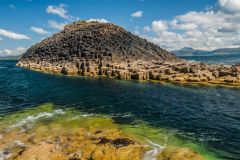 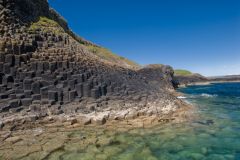 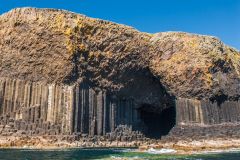 Nearby accommodation is calculated 'as the crow flies' from Staffa. 'Nearest' may involve a long drive up and down glens or, if you are near the coast, may include a ferry ride! Please check the property map to make sure the location is right for you.

More self catering near Staffa >>

More bed and breakfasts near Staffa >>