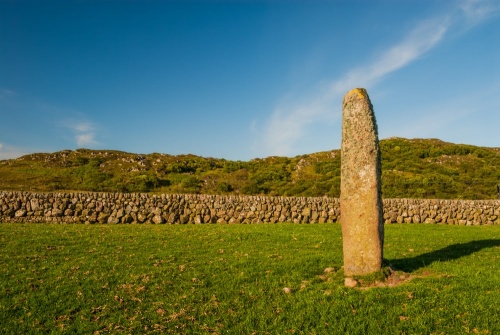 The Tirghoil standing Stone is one of the easiest prehistoric sites to access on the Isle of Mull. This solitary standing stone is immediately beside the A849 coast road at Tirghoil (spelled Tiraghoil on OS maps), on the south shore of Loch Caol, east of Fionnphort.

The stone stands on the north side of the road in a farm field, about 225m north-north-west of Tirghoil. It stands roughly 2.6m high (about 8'6") and is a slender column of granite.

But is it, in fact, prehistoric? 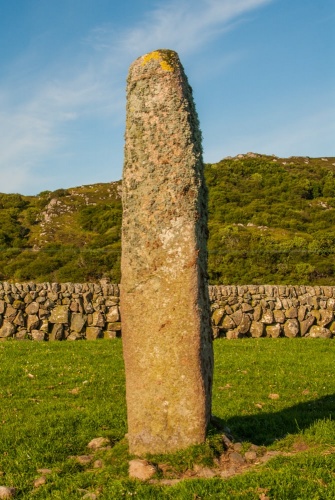 A closer look at the stone

Canmore, the official National Record of the Historic Environment, casts doubt on the stone's age and suggests that rather than being prehistoric it is, in fact, one of a series of stones used as way markers for the old pilgrimage route from Green Point to the sacred island of Iona, a few miles to the west.

There's no easy way to answer the question, but either way, the stone is so easy to visit that it would be a shame not to stop and explore it for at least a few minutes, if for no other reason than to enjoy the superb panoramic views.

We drove past the Tirghoil standing Stopne dozens of times during a wonderful week staying in a self-catering cottage in Fionnphort. Though it wasn't in any of our guidebooks, we could see it so easily from the road that we eventually stopped, just to satisfy our curiosity.

If the stone does form part of a route-marking system, the rest of the nearby stones must be long lost, for I didn't see any sign of them, or of the route they are supposed to have marked.

Tirghoil Standing Stone is extremely easy to visit. It is impossible to miss, standing immediately beside the A849 just east of Loch Caol. The stone is just inside a stone wall enclosing a farm field, and can be seen without even bothering to get out of your car if you want to be that quick about it!

Otherwise, there is a farmyard gate a very short distance to the west, and from there it is an extremely quick stroll to the stone. Just be sure to avoid blocking the farm track and close the gate behind you.

Nearby accommodation is calculated 'as the crow flies' from Tirghoil Standing Stone. 'Nearest' may involve a long drive up and down glens or, if you are near the coast, may include a ferry ride! Please check the property map to make sure the location is right for you.