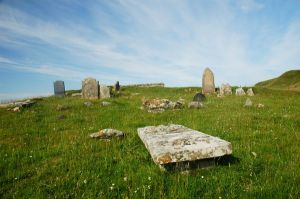 Inchkenneth Chapel
On a small island off Balnahard, on the west coast of Mull, stands a 13th-century chapel containing medieval grave slabs of a type common throughout the West Highlands. The name translates loosely as 'the island of Cainneach', a reference to St Cannoch, or Kenneth, an Irish saint and associate of St Columba.

Within the chapel and the associated graveyard are some very nice examples of grave slabs, effigies, and carved gravestones. Most of these are to various members of the Maclean clan, though legend says that kings of Scotland were buried here when adverse weather did not allow voyage to Iona. Most of the carved stones date from the 14th-16th century.

Inchkenneth was an important centre for monastic life in Argyll, second only in importance to Iona. The monks of Iona grew grain on Inchkenneth to supplement their own harvests. Later visitors included Dr Johnson and Boswell, on their famous journey through the Outer Hebrides.

The little island was once owned by Sir Harold Boulton, who wrote the lyrics to the Skye Boat Song. Boulton enlarged the single house on the island to create the mansion which remains the only dwelling on Inchkenneth.

It later passed to the famed Mitford family, and Unity Mitford lived the last years of her life here. It is now uninhabited save for the single house - and a large population of rabbits and birdlife.

In the graveyard is a slab bearing a raised effigy of an armed man, his feet resting on a beast that might be a hound or a lion. He bears a claymore at his waist and carries a round object like a cannonball. Nearby is a ring-headed cross in a Latin style, dating to the first half of the 16th century.

A verse by Sir George Rowley Hill commemorates this enigmatic place with the words,

"At the far end of Loch-na-Keal
Lies fair Inchkenneth's Sacred isle;
And in the chapel Sleeping there
Are the Macleans, Those valorous folk
Who held Mull From an alien yoke,
So stranger As you pass that way
Please pause And pray And say a prayer
For those who gave Their live for Mull.
To me it's holy Sacred ground
Where ashes Of Macleans abound."

The island can only be reached by private boat.

Nearby accommodation is calculated 'as the crow flies' from Inchkenneth Chapel. 'Nearest' may involve a long drive up and down glens or, if you are near the coast, may include a ferry ride! Please check the property map to make sure the location is right for you.

More self catering near Inchkenneth Chapel >>