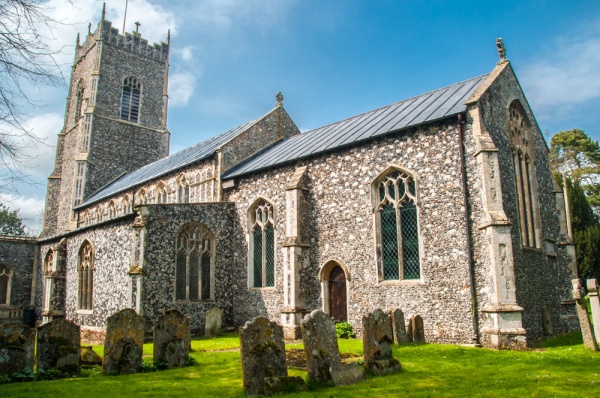 The small church of St Mary serves the scattered village of Wilby, about five miles north-east of Framlingham. There may have been a church here as early as the 12th century but there is very little evidence of that early building beyond a section of rough flint at the base of the north wall.

The church was rebuilt in traditional East Anglian knapped flint in the 13th century, when the south aisle, south porch, and clerestory were added. The highlight of the church is the beautiful 15th-century west tower, rising in three stages to battlements decorated with pinnacles at each corner.

The porch is stunning, with a row of eight canopied niches over the archway. The niches were made to hold statues of saints, which were presumably destroyed at the Reformation. The outer doorway is carved with small grotesque heads interspersed with foliage, bearded heads, Biblical symbols (I spotted St Peter's keys), and crowns. 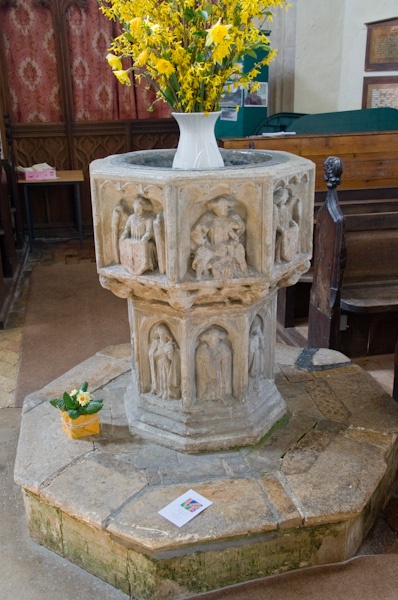 The inner doorway is fascinating, with multiple orders of plain moulding beneath another statue niche, and in the spandrels are ornate foliage carvings and worn heraldic shields. At either end of the doorway are figures of lions acting as drip-stops.

At the west end of the church is a large table tomb to the Green family, with a carved wooden font cover resting on it when we visited the church. Also at the west end is the 15th-century octagonal font, carved with alternating symbols of the Evangelists and angels holding shields around the bowl and more robed figures in the stem, set beneath niches. The underside of the bowl is carved with small angel heads.

In its traditional spot on the north wall, facing the main entrance, is a wall painting of St Christopher carrying the Christ child. You can clearly see fish swimming around the saint's feet as he wades across the river. Beside the doorway you can make out partial remains of painted Biblical texts. Over the doorway is an odd piece of memorabilia; several pieces of lead removed from the church roof, marked with dates and the initials of churchwardens who oversaw repair work on the roof. 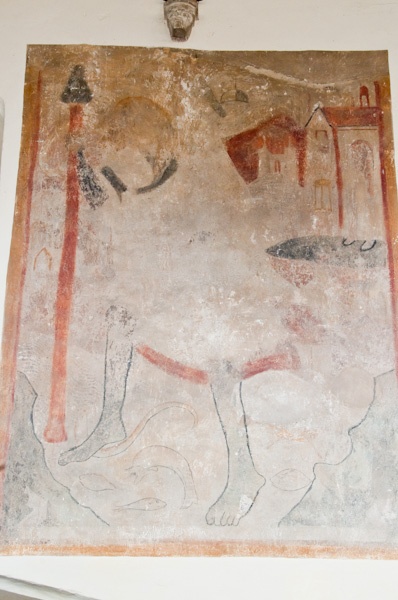 At the west end are several funeral hatchments to important local families, and a carved wooden screen across the tower arch.

One of the most fascinating features in St Mary's is a series of carved angel figures decorating the end of timber roof beams in the south aisle. Some angels hold heraldic shields.

The pulpit is early 17th century and retains its sounding board for amplifying the rector's voice. In front of the pulpit is a 14th-century iron-bound chest.

On the wall is a fascinating brass plaque in English and Latin to a former rector named Joseph Fletcher (d. 1637). The inscription, complete with a rather suspect rhyming scheme, reads:

The memorie of the pious and worthily deserving Mr Joseph Fletcher late rector of this church. He departed this life the 28th of Sept. 1637 aged 60 years.

Two parsons here under one stone are layd
who whiles they livd were both true parsons said
The first was true by name, Fletcher, indeed
Who left for all the Tru-way booke to reed
Who doth though dead to all the true way tread
Whose booke the tru way ye doth spread

One of the most remarkable medieval features in the church is a statue of the Virgin Mary and the Christ Child in the chancel. The statue was discovered in a ditch in the churchyard and brought inside the church for preservation. 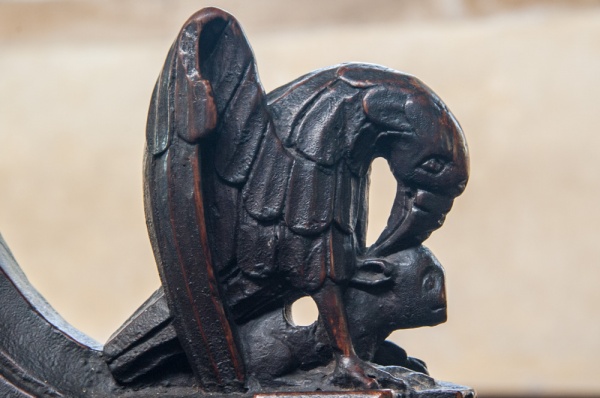 15th-century bench end of a bird attacking a lamb

The real highlight of a visit to Wilby is a superb collection of carved medieval bench ends, perhaps the finest in Suffolk. Each bench end has a central poppyhead rising above a pair of figures on the armrests. The figures include animals, birds, grotesque beasts, angels, and humans engaged in daily activities such as farming and leading a horse.

One figure shows an angel playing a stringed instrument, another shows a strange creature playing pipes. There is a cheeky squirrel eating nuts, a bird attacking a lamb, a rather peculiar elephant, and a wonderful depiction of a grimacing devil turning his head away from a woman with her rosary beads. The quality and variety of the bench end carving is stunning, though some of the figures have been damaged by Puritans. On the south side of the nave are 19th-century benches in the same style as the medieval ones.

The church is usually open to visitors and was open when we visited. The best place to park is at the village hall, down a lane from the churchyard. 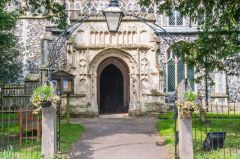 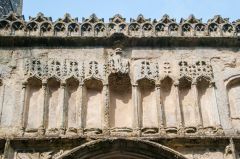 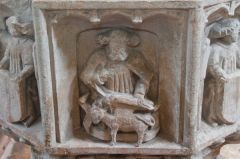 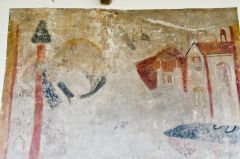 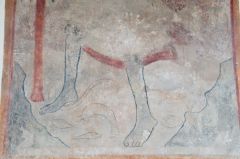 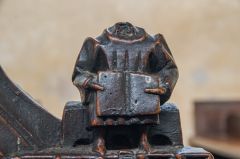 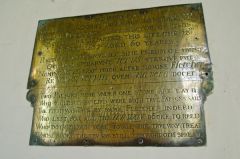 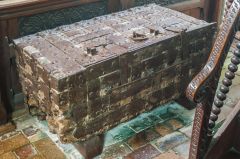